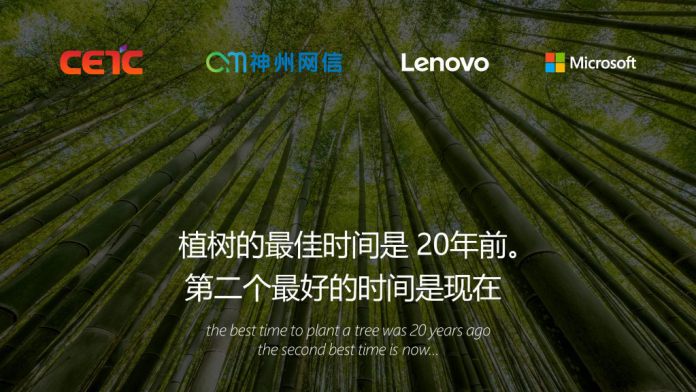 At its Shanghai 2017 event today, Microsoft announced a new flavor of Windows 10. Windows 10 China Government Edition is a custom SKU that will soon be used by China Customs, Westone Information Technology, and the City of Shanghai.

We’ve heard the rumblings of this for a while, with reports in May that a version was in testing. It comes from a collaboration with CETC and is aimed at state-run enterprises and local government.

As you would expect, there are several tweaks to make it suitable for that audience. Microsoft is letting China use its own encryption and turning off its controversial telemetry. There’s also the ability to better manage Windows Updates.

“Over the last two years, we have earnestly cooperated with the Chinese government on the security review of Windows 10,” said Terry Myerson, Microsoft’s executive vice president for Windows and devices. “The Chinese government has the highest standards for security. The tools they choose to use for productivity and creativity must meet the highest levels of quality.”

Meeting that goal has meant the inclusion of many features available in China’s Enterprise version. Windows 10 China Government Edition includes security enhancements, management tools, and more. For example, the government can disable features like OneDrive, or other apps they don’t use.

They’ll also get access to pre-installed devices, Lenovo being the first OEM partner. The hardware manufacturer will launch PCs with the OS, but an exact date has not been forthcoming.

The release is a major milestone for Microsoft, who had initial trouble launching Windows 10 in the region following the Snowden leaks. Alongside China, Windows 10 is now used by the Italian MoD, the Austrian Health Department, and the U.S. DoD. No doubt we’ll see further government adoption as they begin the OS upgrade process.