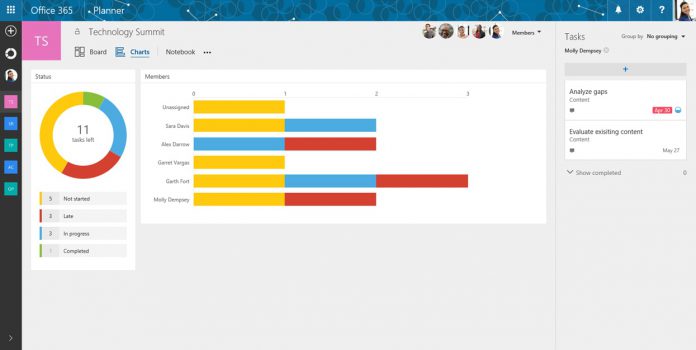 Microsoft Planner was first announced in December of 2015,  followed by a preview early last year and general availability in June. However, the tool was restricted to desktop unless you used a web portal.

That changed on Wednesday with the release of Microsoft Planner for iOS. Users can now create plans, share files and collaborate from iPad or iPhone.

The result is a much faster, performance-tweaked experience. Users can just start up the app and retain their login regardless of any browser cache changes. However, be aware that you need an Office 365 commercial subscription to use it.

Microsoft has confirmed plans for an Android version next, though it’s not clear how long that will take. The roadmap also suggests a UWP version:

“Microsoft Planner will deliver refined mobile experience across platforms and will be available as an Android, iOS, and  Windows Universal App.”

What’s more, the Planner website shows a mockup of the app on a Windows 10 tablet and phone, though strangely it’s not one we’ve seen before.

Though many will be upset with Microsoft’s iOS-first decision, it’s likely just releasing to its biggest user base. We all know that Windows 10 Mobile isn’t doing too well at the moment, and iPhones are popular among businesspeople.

If it follows the usual model, an Android release will probably come soon, with a UWP app sometime after. Until then, iPhone, iPad and iPod Touch users can download it from the App Store.