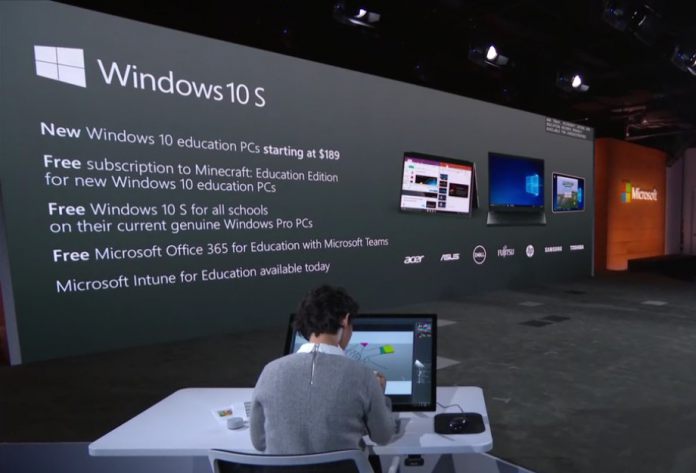 However, that doesn’t mean students can’t run regular desktop apps at all. Apps simply have to be packaged and uploaded to the Windows Store.

When students install apps they will run in an isolated container, ensuring that the rest of the system isn’t affected.

Alternatively, teachers can choose to upgrade the laptop to Windows 10 Pro at any point to gain access to full Windows features.

According to Myerson, Microsoft traveled the world speaking to teachers about the OS and found the importance of stability. He says Windows 10 S will “work the same on day one as day one thousand.”

Part of that is performance, and Myerson promises that after the first boot, Windows 10 S devices will start up in fifteen seconds. That’s a significant increase over Pro, and should help teachers get the class ready quickly.

With Windows 10 S, Microsoft is targeting the education market and relies on a wide range of hardware partners that will offer optimized devices for the new Windows 10 variant. According to Myerson, the first Windows 10 S Devices will be available this summer at prices starting from $189.

To make Windows 10 S more attractive, buyers of those devices will get also a free subscription for to Minecraft: Education Edition and a free license of Microsoft Office 365 for Education with Microsoft Teams.

Microsoft is also bringing finally full versions of Office to the Windows Store which then can be used with Windows 10 S. Those who would like to get rid of the restrictions of Windows 10 S will have the option to upgrade their system to Windows 10 Pro. This will enable them to run any Windows desktop app.

How to Delete a User Account in Windows 10 (6 Methods)