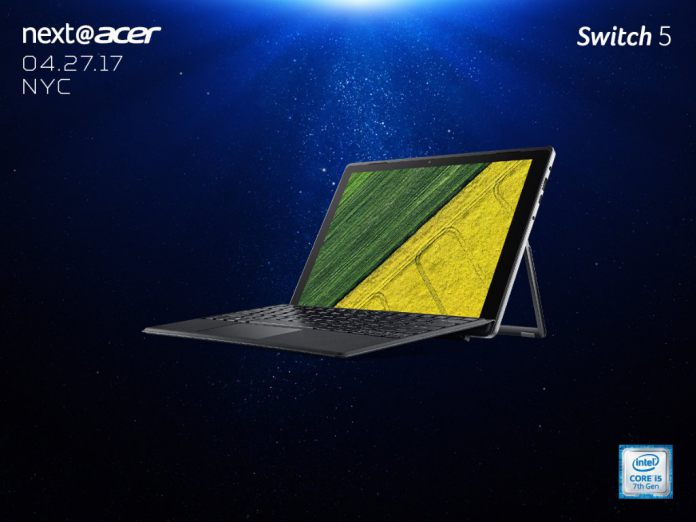 Microsoft’s Surface Pro 4 has a new rival from long-time Windows OEM Acer. The company held a media event in New York City today and raised a curtain on the new Switch 5. Like the Surface Pro 4, it is a 2-in-1 tablet/laptop hybrid that comes with leading specifications and sleek design choices.

Of course, every 2-in-1 hybrid that lands on Windows 10 is a Surface Pro 4 rival. That’s the nature of the beast Microsoft created. Its devices helped shape a market and make it popular. It is natural that other companies will want to mirror that success.

This is even Microsoft’s plan. While the Surface Pro range is meant to do well as hardware, they also serve as references. As such, the company welcomes rivals and I have often said building the 2-in-1 market is good for Windows.

Back to the Acer Switch 5, the device comes with a unique U-shaped kickstand that is auto retractable. We are used to seeing OEM’s put their own twist on the hybrid abilities of their devices. In terms of the kickstand, it is customizable enough for users to put it in any position they want.

The device is a Windows 10 machine and has full support for Windows Hello for improved security authentication. Acer employs its LiquidLoop technology to help the Switch 5 keep cool without the need of a fan.

For those who want something more modest and affordable, Acer has the Switch 3. This convertible comes with a 12-inch Full HD 1080p screen, the Active Pen, Intel Pentium or Celeron silicon, and 4GB of RAM. The lower spec’d device also gets the U-shaped kickstand.

Keeping in line with its standing as a Surface Pro 4 competitor, the Switch 5 is similarly priced against Microsoft’s product. The device will start shipping in North America this June and will cost $799. The Acer Switch 3 will also roll out in June and will cost $399.