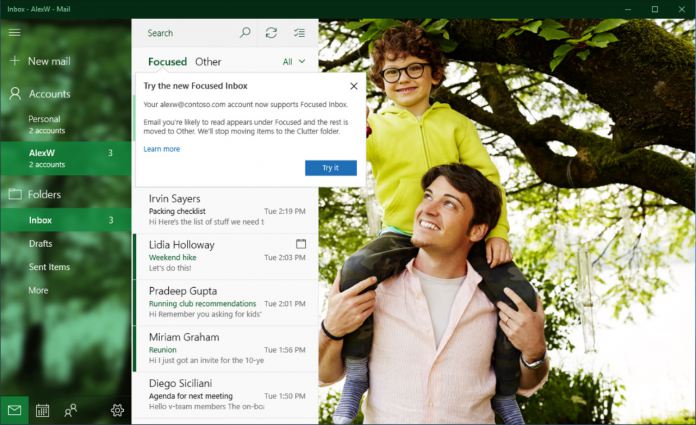 Last week we reported that Microsoft was reportedly rolling out the Focused Inbox feature for Outlook Mail to more users.

Now the company has announced that the highly-anticipated mail feature will begin rolling out to all Mail and Calendar users over the next few weeks, along with several more updates.

Microsoft has been testing the Focused Inbox feature with some Windows Insiders in the past couple of months. Now it’s time for the feature to reach the public and help users manage their emails.

Focused Inbox is a major feature in Outlook which helps users focus on the important stuff while keeping the less important emails in a section easily accessible.

For example, with Focused Inbox users can choose to hide all the newsletters in the Others section and designate which important things will show up in the feature.The feature is automatically enabled, however, users can easily disable it since it’s optional.

The Windows 10 Mail app will also support a Mentions feature which will allow users to tag people in important emails. By simply adding the @ symbol anywhere in the body of an email, a list of frequent contacts will appear for users to choose from.

Once users pick the person they want to address, their name will be highlighted in the message in blue. This will notify tagged persons that they are being asked to take action in a message, and will also add them to the To: line of the email conversation.

With the latest update of the Windows 10 Calendar app, users will gain access to several new features, such as color categories which will allow them to categorize their calendar events in a variety of colors. According to Microsoft, this has been the top-requested calendar feature.

Interesting Calendars will also arrive at the Windows 10 Calendar app. Powered by Bing, the feature will help users keep track of TV schedules and their favorite sports teams’ calendars. For example, users will be able to add game schedules for any team they support.

Microsoft has also added simplified summary cards in the inbox and calendar, which will enable users to quickly get to travel reservations and package delivery details. Small improvements have also been added, such as the integration of location suggestions from Bing to add popular addresses in emails.