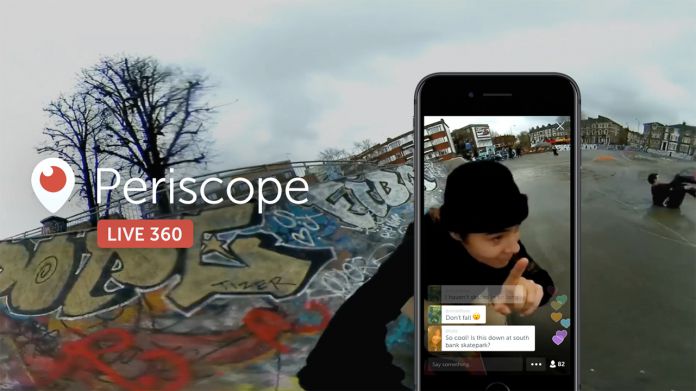 This week, Twitter introduced an interesting new feature – 360 degree live streaming. The functionality is thanks to Periscope, which integrates directly into tweets.

For those unfamiliar, Periscope is a live-streaming app for iOS and Android, acquired by Twitter before its launch in 2015. Viewers can interact with streamers, sending comments and hearts.

Periscope 360 video is currently available to a set of test streamers, and Twitter promises “an inside look with well-known personalities.”

Tweets with this new feature are marked with a “Live 360” badge, and users can swipe or move their phone to rotate the point of view. Periscope current has a waitlist to receive the feature, which you can sign up to here.

This feature adds a whole new aspect to Periscope’s livestreams. Being able to see things outside of the streamer’s vision allows watchers to observe the environment more and removes the awkwardness of staring at someone’s face.

However, Twitter CEO Jack Dorsey has hinted at a further, highly requested update. Taking to Twitter today, the co-founder said:

This is our most requested feature (today & always). Mostly to quickly fix mistakes. Anything beyond would need to show revision history https://t.co/fHtGNjkuEx

Dorsey also drilled down a little into how the feature will work. As with Facebook, edited tweets would have a revision history to avoid misuse of the feature. In reponse to positive feedback, he revealed that Twitter is “thinking a lot about it.”

Why it’s taken so long to come to the decision is another story. It’s been ten years since Twitter’s launch and users have been asking for it ever since.

The most likely explanation is the need to do it in the right way. Mechanics such as embedding tweets may have to change, as they might not reflect edits.

It’s also a sensitive topic due to the ability to mislead users. If someone replies to a Tweet which is then edited, criticism may not reflect the current content. As a result, Twitter will likely implement a short period of time to fix typos and other small errors.

The idea could yet fall through, as some users would prefer a fast, unmodified experience like live TV. Whatever the case, it’s nice to see some new features coming to the platform, and to see the company thinking about community feedback.