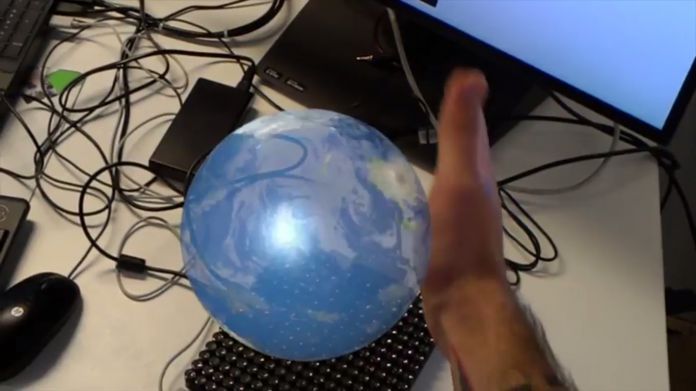 Microsoft’s HoloLens headset creates a mixed reality for users. One of the benefits over virtual reality is that HoloLens puts content into the real environment and lets users interact with it. For the most part this is visual, but what if it was possible to actually feel holographic objects? Immersion, a research company from France is now experimenting on solving this challenge.

One of the biggest problems facing a medium seeking ultra-realism is how to create real touch feedback. Microsoft has been experimenting on its own improved haptics for virtual reality. However, real touch feedback is arguably more important for HoloLens and augmented reality.

Immersion is at the forefront of this development. The company is working on Ultrahaptics, which you can check out in the video below. Currently in the testing phase, the technology hopes to bring refined and precise touch to mixed reality.

Ultrahaptics relies on sound technology to work. It uses ultrasound to bounce back feeling sensations to a hand. This works for both haptic feedback and haptic communication. In terms of augmented reality and HoloLens, this will make the mixed environments even more realistic. Beyond entertainment purposes, it could work for interacting with productivity applications and workflows.

Users will get much more realism when interacting. A noticeable feeling of touch will be very important for interaction with interfaces, buttons, and even touching in-game characters.

Imagine how this kind of technology could work with a service like Skype. HoloLens will one day allow Skype contacts to be formed in an environment as a hologram. Perhaps a loved one while traveling for example. Having the ability to really touch has all kinds of amazing implications.

Let us know in the comments below how you see this type of technology adding to HoloLens.