Microsoft has filed a new patent that aims to change the way we interact with peripheral devices. The file is titled “Systems and Methods for Controlling Feedback for Multiple Haptic Zones”. The company made the plan through the US Patent Office.

The patent focuses on multi-zone haptic feedback for interacting with devices. Microsoft plans to take this to the next level with more advanced feedback. The company plans to bring haptic feedback to peripherals like keyboards, tablets, and mice.

Microsoft references how this idea would work for playing games on tablets or PCs, when using a keyboard and mouse. The patent states:

“A number of users may be sitting around a video screen while a game and/or video is playing. For any users/viewers holding controllers or other I/O devices, there may be an opportunity to determine the various locations of these users and/or devices -and an appropriate haptic response may be individually delivered to these various devices according the location and/or position of the users/devices within the viewing area.”

The company says that a device will have specific haptic zones separated from one another. These zones will interact differently depending on the app being used to the visual/audio experience the users is getting.

Some devices will have an independent processor, while others will use haptics through the procssors on another device no part of the peripheral. The haptics will be used for a number of applications:

“Additionally, the device may receive indications of haptic responses to be delivered to the user. Such indications may come from a variety of sources – such as operating system commands, user application commands, audio tracks, video/gaming playback, metadata or the like. The devices may determine the appropriate level of haptic response to energize (e.g. amplitude, frequency, pulse and other characteristics) and which haptic elements to be energized.” 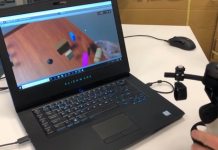