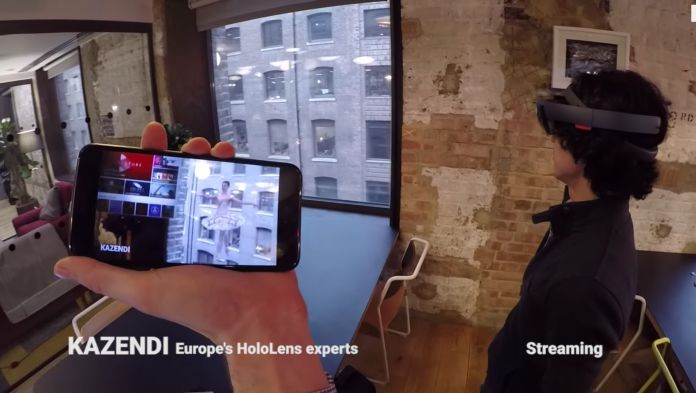 Microsoft’s HoloLens has not been embraced widely on other platforms. As a development device that is not surprising. However, the augmented reality headset is the focus of a new iOS application. Kazendi, a London-based developer, has debuted HoloStream, which works with Apple’s iPad and iPhone. The app allows the streaming of HoloLens apps from the device to iOS.

This is a notable release because it is the first HoloLens/iOS app and the first to allow streaming from the headset to iPhone/iPad. HoloStream is available now for $39.99. Microsoft has debuted a similar streaming app for Windows, but this is slightly different.

Redmond’s app streamed from PC to HoloLens to improve graphics. HoloStream differs by streaming the other way around. This means users can show off a hologram without everyone needing a HoloLens headset.

Kazendi says the app comes with the following features:

The company says the app is reserved for iOS at the moment. However, if HoloStream is successful on Apple’s platform it will also come to Android. The biggest stumbling block on the path to success will be the price.

These days, users are used to getting powerful apps for little outlay, or even for free. Charging nearly $40 will put some developers off, especially those who have already spent thousands on a developmental HoloLens unit.

Microsoft’s new Holographic Remoting Player app hopes to improve graphics by stream from a PC to HoloLens. The application is now available on the Windows Store and brings advantages for developers. With this app, Microsoft is trying to improve the graphical experience of HoloLens.

The company’s plans for HoloLens are ambitious and include marrying the augmented reality device with virtual reality. However, there are undoubtedly limitations with HoloLens, graphic performance is one of them. Compared to powerful virtual reality headsets like Oculus Rift and HTC Vive, HoloLens lacks the same graphical detail.

Because high-end VR headsets are tethered to PCs, they can stream directly from a desktop and achieve improved graphics. Microsoft’s augmented reality hardware is wireless, which has benefits for interacting with the whole environment. However, the lack of a physical connection compromises graphics quality.

By introducing the Holographic Remoting Player, it is now possible to stream images from a desktop to HoloLens. Using Wi-Fi, graphics should be smoother and more detailed.

“You can simulate inputs with the Unity Play Mode, which is very useful for developers. Moreover, you have the option of Unity Remote Debugging, which lets you run an app you built on the HoloLens by connecting to the headset through Unity in Play Mode. This lets you access the Unity Editor screen, offering input and letting you work on debugging your code directly from here.”