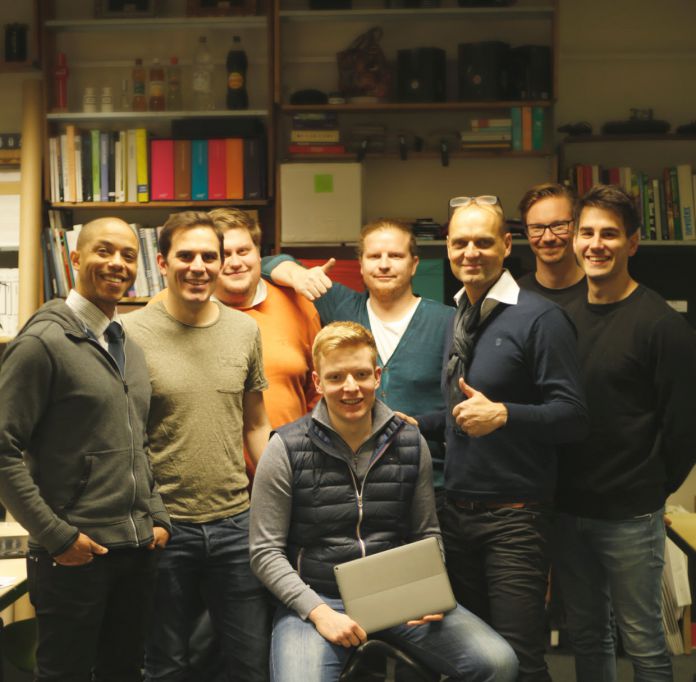 Leading Crowdfunding platforms such as IndieGoGo and Kickstarter have been around for a while. Technical problems in the funding phase are now considered a thing of the past, even though campaigns are growing bigger and bigger every year – such as Chris Robert´s Star Citizen game which is topping the list with USD $133,000,000 of raised funds.

However, last week the Finnish startup Eve Tech made it happen when the crowdfunding campaign for their high-end, two-in-one Surface Pro clone Eve V temporarily crashed IndiGoGo´s payments system. Orders were coming in at such a pace that the platform just could not handle them anymore.

The first batch of units sold out in just three hours, leaving backers only the option to pre-order units that will arrive much later. At the time of writing, the amount raised is standing at USD $1,150,280 which is a whopping 1500% higher than the initial backing goal.

The Eve V is already fully developed and functional and Eve-TEch co-founder Konstantinos Karatsevidis is happy to be already a proud owner this impressive Surface Pro 4 clone – with better specs than Microsoft´s device. 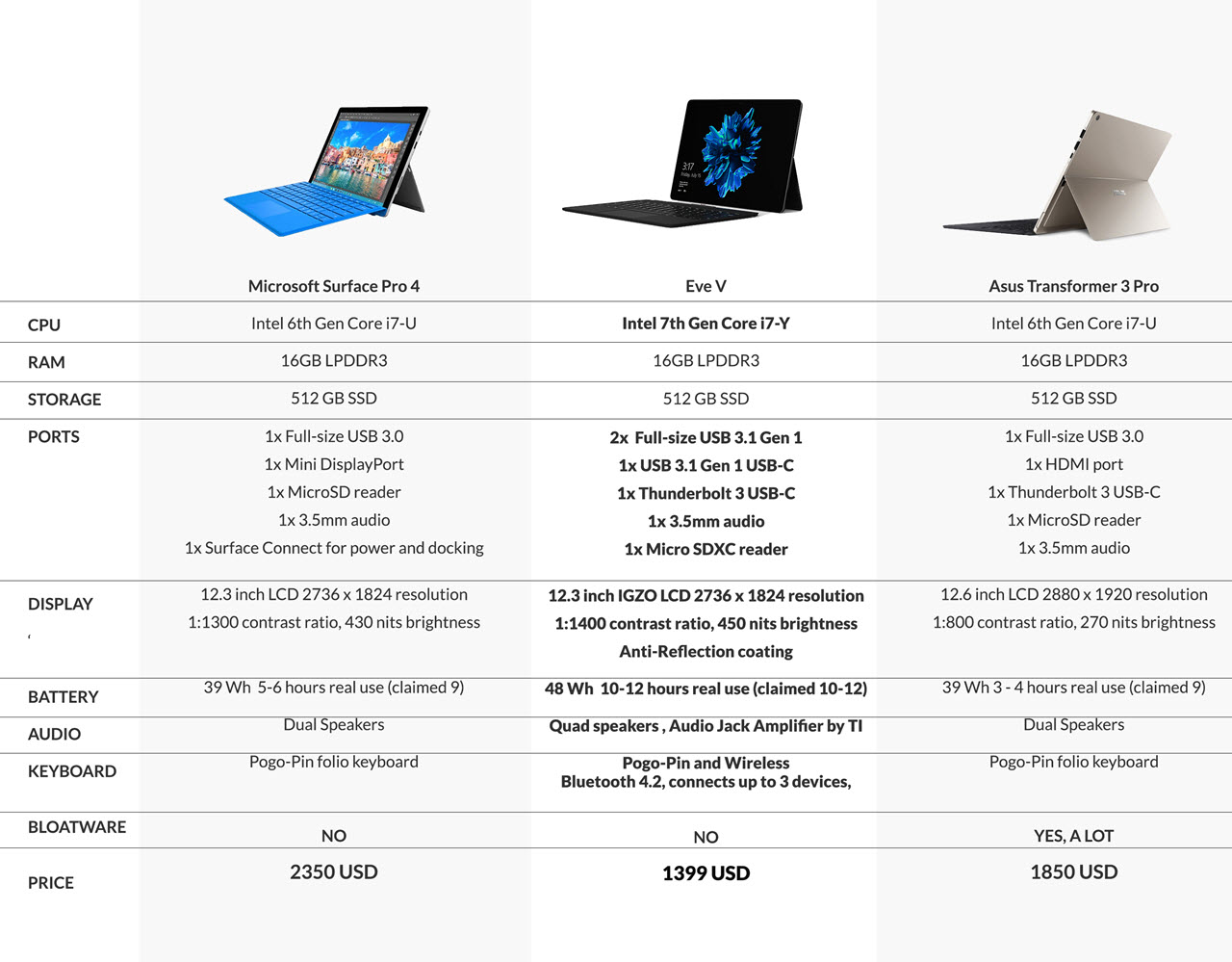 There is currently no comparable device in the market in the two-in-one segment with similar performance and price-quality value.

The Eve Story: Building own devices

The Eve V is Eve Tech´s second device. Konstantinos Karatsevidis and his co-founder Mike entered the market in 2014 with a self-made Windows tablet, the Eve T1, offering solid Windows performance for just €159. We spoke with Konstantinos about how it all began and how they managed to launch what he calls a real Surface Killer as a fully community-developed device.

How did you become a hardware maker and how did you manage to create a community-developed Surface Pro clone?

Me and my co-founder Mike were both quite geeky and would buy all kind of creative things that were available. We wanted to create a Windows tablet and wanted to see if we could reate hardware better because we were not satisfied with most devices in the market.

When we started around 3 years ago all the products available were really low-quality. We wanted to try out and create our own device and we started with making the Eve T1, which was a small 8 inch Windows Tablet.

As it offered quite a good value for the price, it got a lot of positive reviews. We launched it in December 2014, and as we got worldwide press coverage, many of them were sold really fast.

After the T1, the main idea was that we wanted to sell hardware online, so that we would not have a middleman in between and our prices would become even more competitive. The idea was to sell high-end devices for a lower price.

We noticed in online comment sections that a lot of people were saying what they would change in a particular device and how they would improve it. They were also saying that they were willing to pay a little bit more, and if the device had been better here and there, that they would be definitely buying it.

That´s how the idea of crowd development was born – from people discussing how devices should be different.

And actually, this happens with all products. Every time when there is a new Apple or Samsung product, there are thousands of people in the comment sections of the top tech-sites that share what they would do differently, what should be improved.

So they launched eve.community, a forum based project where people can register, and together with other tech-enthusiasts collaborate to build the devices of their dreams. And the first project that came out of this is the Eve V.

The Eve team took the role of managing the discussions, doing viability studies, getting support from hardware makers and leading the process until the final decisions were made with polls.

How did you manage the process of crowd development? It sounds like a very difficult concept.

This went very far. It took us 12 months to develop the Eve V together with the end users. We were developing it in the Eve community from scratch.

Basically, we were doing different threads and topics. Let´s say, what displays do we have, and then we would first introduce what kind of technologies are available, what kind of displays are available, then have a general discussion. Then after that, we would come up with another topic where we would narrow down these things a bit and then after that we would have the final voting round. So most of the specs were decided by voting.

How did you make sure that those discussions and polls didn´t reach the point of wishful thinking and were in line with feasibility? This sounds difficult, especially regarding the final cost of the product and combining all different hardware aspects.

We got a lot of backing from Intel and Microsoft and our top-tier engineering team. For example, our project manager in China previously worked on Apple´s iPhone 6 and the iWatch in Foxconn and could bring in top-notch expertise.

But yes, this was the hardest part of crowd-development. That´s why we had a community that was kind of really small, with only 1000 people. There we explained to them what was possible and what was not.

And then we had the discussions and voting. That´s why it took so long. Because we had everything together with the manufacturers, and in fact, choosing the display was the hardest thing. It took us almost six months to get the display which the community wanted. That was really hard.

You might have noticed that most of the products on the market have very average displays. And only, like real flagships that are super-expensive have really good displays, like for example Apple products, some Samsung products, and of course the Surface tablets. The main reason for that is that the good displays are produced by few companies in the world, like Sharp, JDI (Sony), LG, Samsung. They are the top-tier suppliers for displays, everybody else buys their stuff.

And to get the displays from those companies you have to have a huge volume commitment. So you have to be able to sell 500.000 devices per year. So that was really hard to achieve. But because of our great community, we were able to persuade one of the top-tier vendors to provide the display we wanted. And that greatly helped the project. But it took us almost six months to do that.

According to Konstantinos Karatsevidis, also the name took a lot of time to decide. In the beginning of the project, it was called Pyramid Flipper as a codename. Pyramid Flipper served as a metaphor for the inverted corporate pyramid with investment and management at the top and the customer at the bottom. A reminiscence to the idea of  Crowd Development.

As for the final name, we had to come up with a name that was also supported our community. We had a lot of names but our community did not like any of them. We actually had to do a poll with about 120 names, and one of the suggestions was Eve.

When I noticed it I thought it was a really good name as it also represents the inverted pyramid and sounds somehow cool. And the community also liked that idea very much. The company´s name Eve itself comes from the idea of “evolutionary electronics”.

Backing from Intel and Microsoft

You´ve mentioned that Intel and Microsoft backed the development of the Eve V. What did you get from them?

Intel backed us with a six-figure sum. Microsoft took a different role than Intel which does a lot of hardware testing for us. Microsoft, on the other hand, helped us to make sure that Windows, especially Windows 10, works fine, that our device would not leave the factory without really working well with Windows 10.

You have to know that Intel is interested in selling as many CPUs as possible and Microsoft wants to sell as many licenses as possible for Windows. Microsoft saw big potential in our concept of crowd development. In general, I think their involvement also happened, because, in this industry, there is an approach that you never know who is going to be the next Apple.

Is the Eve V indeed a Surface Pro 4 Killer?

Eve Tech ironically calls the Eve V a Surface Killer. And by just looking at the specs and from what has been revealed so far, this sounds like a valid nickname. Comparing the top versions of both the Eve V and of the Surface Pro 4, the crowd-developed device offers much more for less money:

But might this picture change until the first units get shipped in February/March?

To call the Eve V a Surface Killer is a bold statement. Do you think this might hold true even if Microsoft comes out with the Surface Pro 5 in the coming months?

We heard that Microsoft CEO Satya Nadella also wants to get an Eve V unit?

Yes, with all the media coverage about us now, the top management of Microsoft also noticed us. We have been in touch with one of their Vice Presidents and Satya Nadella wants to get a unit, so now we are preparing one for him.

The huge success on Indiegogo and the interest of Microsoft´s CEO is a clear sign that Eve Tech has come up with something very powerful. While the startup is still small and the team young and quite inexperienced, this did not prevent them from challenging the big hardware makers in their own camp. If Eve Tech can do it, why is it so difficult for Microsoft, HP, Lenovo, Dell, Asus and all of those multi-billion companies to produce even better devices?

It is out of question that technically and financially they would be able to bring out a similar or superior product themselves. Those big corporations might be unable to carry out such projects as there are too many teams and departments involved, and the overall corporate strategy might be an obstacle as well.

To be fair, one has to admit that Microsoft´s Surface Pro 4 and the Surface Book are great products, currently leading the segment for two-in ones / convertibles. A lack of competition may have been the reason for limiting the Surface line to where it currently is. Luckily, these times are coming to an end now. There are definitely good times ahead in the PC market.

And Eve Tech will not stop here. While the production of the Eve V is kicking in, the Eve community is already brainstorming other device types they want to accomplish. The game is definitely on for crowd-development!