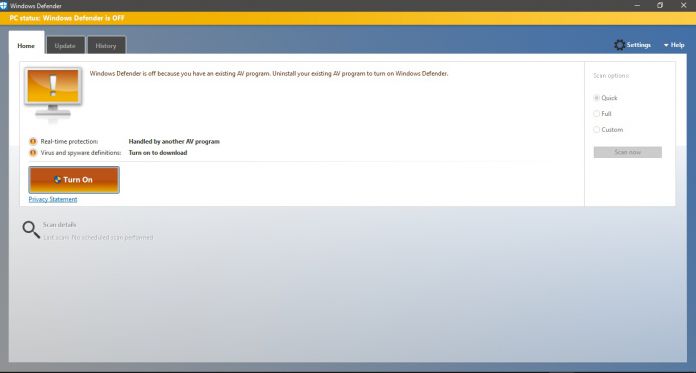 Microsoft is under investigation by a Russian antitrust authority. The company is accused of attempting to monopolize the antivirus market since a recent Windows 10 update. Cybersecurity and antivirus firm Kaspersky argues that Microsoft is making it difficult for rivals to compete on its platform.

The Federal Antimonopoly Service (FAS) is investigating the accusation. More specifically, the body is looking into whether Microsoft has violated Part 1 Article 10 of the Federal Law ‘On Protection of Competition’ [PDF]. This law prevents companies from attempting to be completely dominant in a market. It also prohibits companies from purposely restricting or eliminating competition.

Moscow-based Kaspersky Lab argues that it has wasted “months of fruitless discussions and multiple exhausting attempts to resolve the issue directly with Microsoft”. The company explains that Microsoft has taken action in Windows 10 that stops rivals from competing. Kaspersky says Microsoft now only gives third-party providers six days to adapt their software for new Windows builds.

The previous timeframe was two months. To make matters worse for independent developers, their services are now disabled by default when a new Windows build is downloaded. This allows Microsoft to makes its own Windows Defender software the default antivirus.

In a blog post to lament Microsoft’s policy, Kaspersky says the company is blocking numerous competing apps in a similar way:

“Those of us who’ve been in this industry decades know that Microsoft was once a security leader, as it made a concerted effort not to ship products with known vulnerabilities and started proactively working with the security researcher community early on…

When you upgrade to Windows 10, Microsoft automatically and without any warning deactivates all ‘incompatible’ security software and in its place installs… you guessed it – its own Defender antivirus. But what did it expect when independent developers were given all of one week before the release of the new version of the OS to make their software compatible? Even if software did manage to be compatible according to the initial check before the upgrade, weird things tended to happen and Defender would still take over.”

“We have made significant improvements in protecting customers from ransomware in the Windows 10 Anniversary Update. To help protect against ransomware and other types of cyber threats, we suggest you:

The Block at First Sight cloud protection feature in Windows Defender is enabled by default. For IT Pros, if it was turned off we recommend turning it back on, and we also recommend incorporating another layer of defense through Windows Defender ATP and Office 365 ATP. For more information about each of these technologies and techniques and how they work, please download our white paper Ransomware Protection in Windows 10 Anniversary Update.”

Discussing its commitment to fighting ransomware, Microsoft says such attacks have doubled in the last year. Because of the deployment method is easy, it means attacks are varied and costly. With Windows Defender, users can get protection as a default in Windows 10, Microsoft confirms:

Kaspersky insists Microsoft’s practices are an attempt at monopolizing the antivirus market on Windows 10. Because of the six day period, the company says it does not have time to prepare its software. It is the same for other independent developers, who lack time to ensure customers are protected. Kaspersky says Microsoft is pushing out rivals and leaving customers with no choice other than Windows Defender.

Other complaints filed by the company include Microsoft automatically activating Defender when a third party service expires. Anatoly Golomolzin, Deputy Head of FAS and among those investigating, appears to agree:

“Actually, Microsoft’s actions aren’t only making things worse for users and killing off the whole ecosystem of independent developers; they’re also undermining users’ trust in Microsoft: creating an illusion of security while destroying the main competitive advantage of its platform — openness and democracy,” Kaspersky wrote.