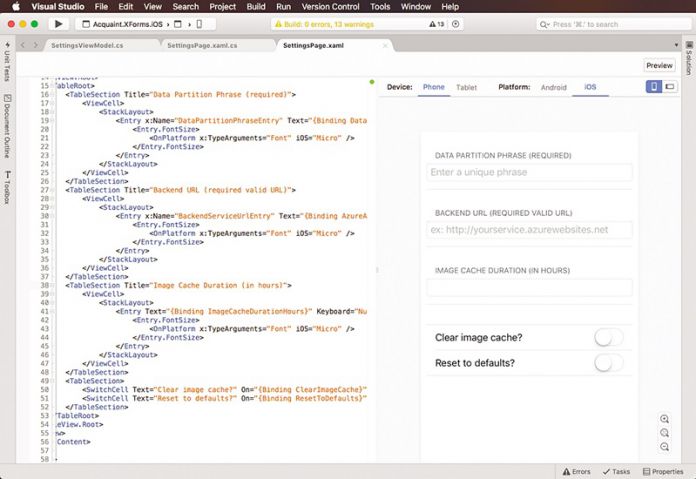 The UX is based on the Visual Studio’s UX with a distinct look and feel like a native macOS software. As it the case with Visual Studio for Windows, Visual Studio Code is available for users who don’t a full IDE but rather a lightweight standalone source editor.

Visual Studio for Mac is compatible with most Visual Studio project types, using same MSBuild solution and project format. This makes for an effortless transition between the two operating systems and easy data sharing.

Thanks to Xamarin Studio, Visual Studio for Mac supports C#-based iOS, Android and Mac development with the Xamarin Platform. This way, developers can use a wide array of devices across different platforms to build a distinguished app experience.

The suite shares lots of common traits with its Windows version. In addition, it features Azure powered cloud-based server back end, along with the support for C# and F# languages.

Microsoft is marketing the suite as a mobile-first, cloud-first development tool, targeting professional users that want to work on any operating system they like. By catering to developers that use a mixed set of tools, the company is hoping to retain and expand the number of users.

However, making Visual Studio cross-platform could also encourage existing Mac and iOS developers to make more apps for Windows. The suite makes the process much easier as these users will no longer have to buy a Windows computer or set up a virtual machine to access it.

This is a continuation of earlier Microsoft’s efforts to address the needs of Windows developers exploring other operating systems, most notably Linux. Earlier this year, the company introduced a native support for Linux command line Bash for the first time ever.

As a result, Microsoft has been working on constantly improving the developing experience regarding Linux. This is directly connected to raising the number of people using Microsoft’s Azure App Service. The key part of that process is catering to Linux users.

The preview is available for download from VisualStudio.com. More in-depth details are available here.