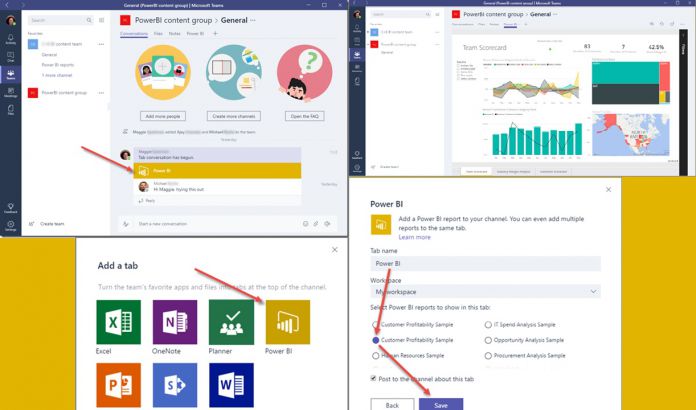 Microsoft Teams was launched last week as a workplace group-communication. It taps into many Microsoft services like Office 365, SharePoint, and Skype. Teams also integrates with Power BI Groups, as announced by the company on the official Power BI blog.

With the release of Microsoft Teams, businesses will be interested in how the service helps their groups communicate and share. Power BI Groups already serves some of this functionality by allowing users to share dashboards.

Now, admins in Power BI can select Microsoft Teams integration when creating a group or team. This will form a tab for previously created dashboards and workspaces when a team is created. All reports from Power BI will automatically be integrated into the new Teams service. With this feature, users can share and link reports directly.

Microsoft explains this integration is an extension of Office 365 Groups. Power BI Groups is built off the Office 365 service, into which Microsoft Teams plugs in.

The company launched its new chat-based workplace at an Office event last week. The service plugs into the company’s Office 365 suite. It works directly in Office apps like Word, Excel, PowerPoint, and OneNote, while also other services like Skype and SharePoint.

As we discussed last week, Microsoft put a target on Slack with this release. The similarities between the two services are frequent. Teams looks a lot like Slack and works in much the same way. Microsoft Teams presents a list of persistent chats that can be accessed as a group or individually for 1:1 meetings.

As well as integrating into Microsoft’s own services like Power BI Groups, the new service is also embracing a degree of openness. Open APIs and a dedicated bot framework are part of Teams. Custom memes within chats, custom channels, and integration with other cloud services are also included.