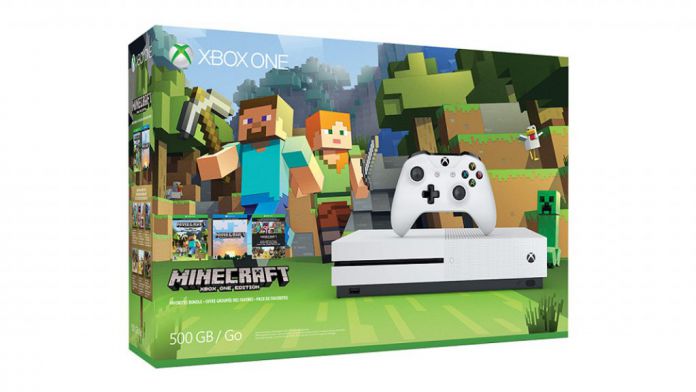 The Xbox One S was launched last month. Its arrival is nestled nicely for the end of summer and before the preparations for the Holiday Season. Oh yes, these days September is the start of the holiday cycle. Microsoft is planning for the busy sales period with a slew of Xbox One S bundles. The latest will undoubtedly appeal to Minecraft fans.

This latest release is an Xbox One S Minecraft Favorites Bundle available now in the US and Canada. It features a 500GB version of the console and a digital copy of Minecraft: Xbox One Edition. Speaking to Thurrott, Microsoft described Minecraft for anyone who has somehow missed the game:

“With more than 100 million copies sold to-date, Minecraft is a game about placing blocks and going on adventures. You can explore randomly-generated worlds and build amazing things from the simplest of homes to the grandest of castles, play in Creative Mode with unlimited resources or mine deep in Survival Mode, crafting weapons and armor to fend off dangerous mobs.”

Minecraft may have sold more than 100 million copies, but it is still selling a lot of units. Microsoft is obviously hoping the pull of the game could lead customers to the Xbox One S. To get this bundle you will have to pay $300 to get the Minecraft Favorites Bundle.

The console in the box is a standard white Xbox One S. Last month, Microsoft rolled out the console as an updated version of the original Xbox One. The console cut the size of the OG model by 40% by placing the power supply in the body. Other key features include 4K gaming support and a 4K Ultra HD Blu-ray player.

Aside from the console, there is a download code for Minecraft. Microsoft points out that the Xbox One version has advantages over the regular game. It offers “enhanced performance and 16X bigger worlds compared to the Xbox 360 Edition,” Microsoft says.