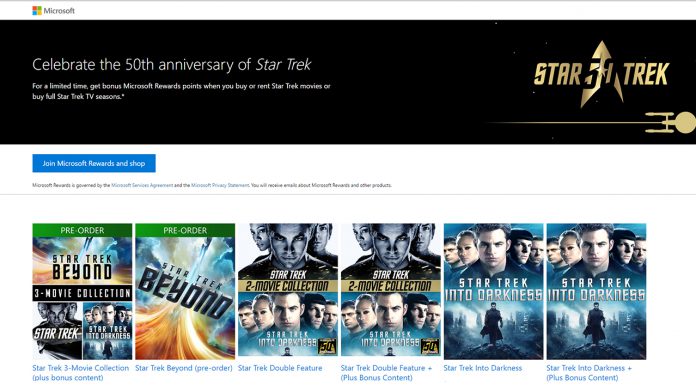 You may have missed it, but the Bing Rewards program began the switch to “Microsoft Rewards” at the end of last month. The idea was to diversify the ways in which you can get points, and it looks like events will play a role in this.

To celebrate Stark Trek’s 50th anniversary, Microsoft is offering fans points. You can gain 500 points for a rental, 3,000 for a movie purchase and 4,000 for a complete season. You can then use these for Xbox and Windows gift cards, Microsoft Store purchases, and charity donations.

Unfortunately, the offer is only available in the US, and it won’t be around for much longer. There’s no official word on when it will end, Microsoft simply stating a “limited time.” Naturally, you can only get one bonus offer per item.

The available items cover a lot, but the awards don’t apply to single episodes, music or games. The content varies a lot in price, and the cheapest way to get 3000 points is ordering an Xbox SmartGlass title for $12.99. Failing that, you can buy Star Trek (2009) or Star Trek Into Darkness (2013) for $17.99.

3000 points won’t be enough to buy you that much, which is probably intentional on Microsoft’s part. However, there are still some significant deals you can take advantage of.

For 1,700 points you can get a Windows Store gift card, and still have enough left over to enter all of Microsoft’s sweepstakes, which include a Surface Book and Xbox One giveaway, a Star Trek Beyond bundle and the chance to win one million extra points.

You can earn more points by using Edge, where you’ll get up to 150 points per month, five points an hour. You can also earn up to 50 points a day by searching with Bing, where you get five points for each search.

Purchasing from the Microsoft Store will also net you points, with one for every $1 spent. Obviously, Star Trek is a much higher rate, so if you’re a big fan, it’s worth checking out the Star Trek Rewards page once more. 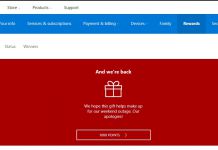 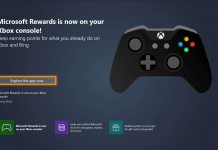 Microsoft Rewards App Rolls out to All Xbox One Users