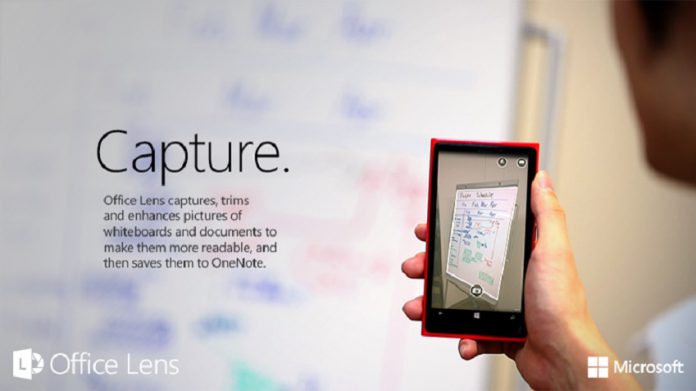 Microsoft has today launched its Office Lens application on the Windows Store. This is a Universal Windows Platform (UWP) app for Windows 10. The company has been testing Office Lens since April, but there are no new features on this UWP release.

Office Lens gives users tools to trim, enhance and make images of whiteboards and docs. The service then saves the content into Microsoft’s OneNote app. Images can be converted to PDF, PowerPoint, and Word files.

The service has been around for some time. It has been a mobile app available on Android, iOS, and Microsoft’s own Windows Phone platforms. It became clear Microsoft was working on a UWP Windows 10 version earlier in the year.

The company had slowed down support on the Windows Phone Lens app. Instead, the iOS and Android versions were scoring new features and functionality. Microsoft has detailed the features that come with the new UWP app:

If you are familiar with Office Lens from the older Windows Phone platform, then this is the same experience. Like other versions, the UWP app lets users scan content like whiteboards, documents, and business cards.

This is a Universal Windows app, which means it works across form factor on Windows 10 devices. However, Office Lens is primarily a mobile-oriented service. Sure, you will be able to have this app on a PC, but we are not sure how a desktop or laptop would handle the scanning of documents.