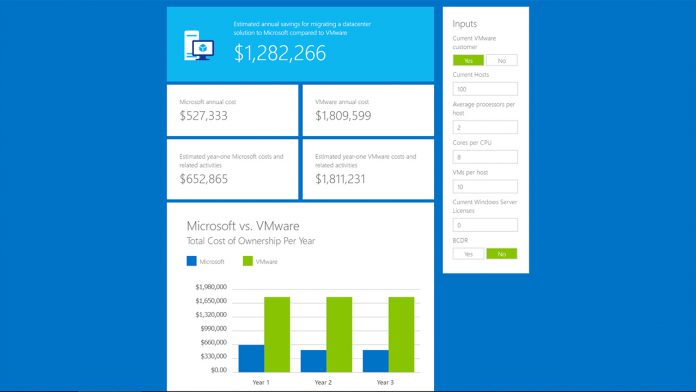 Microsoft’s Windows Server 2016 is set to launch in September, and the company’s biggest competitor is VMWare. To encourage more users to make the switch, a promotion is offered.

If users make the switch before June 30th, 2017, they will get free Windows Server Datacenter licenses. Of course, there is one caveat: you must also purchase Software Assurance.

Despite this, the deal should still help with some of the migration costs, and according to Microsoft, the savings won’t stop there. The company has targetted VMWare aggressively with a tool that calculates savings made from switching to Hyper-V.

No matter what data you enter, it’s clear that annual costs would be much lower. This is probably a big factor behind Microsoft’s growth in the market. Gartner  Magic Quadrant visualizations show the company closing the gap by moving up and to the right.

The company has also published an additional website, focusing entirely on the benefits of choosing them over VMWare. This marks one of the most aggressive campaigns we have seen from the tech giant since the anti-Google Chrome adverts.

Windows Server 2016 will launch at the Ignite conference in September, and will have a number of security, management, and storage improvements. Microsoft has released a step-by-step guide for those looking to switch:

Whether or not you agree with the tactics, it’s hard to argue with the potential cost savings. VMWare may offer some features that Hyper-V is missing, but given Microsoft’s growth, it wouldn’t be unreasonable to see a new market leader by this time next year.