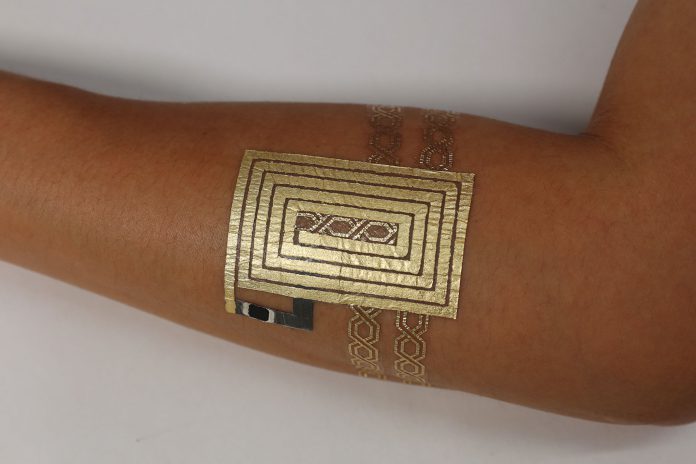 Microsoft Research and MIT Media Lab have revealed a collaboration for temporary connected tattoos. The fabrication process is called “DuoSkin” and produces a connected interface that can be worn on the skin. Once worn, the DuoSkin technology will act as a NFC input for smartphones and other devices.

Back in May, Microsoft Research produced a paper discussing its advances with this technology. Named Tattio, the company called the tech a meeting of personal design and technology.

Microsoft described Tattio as a fabrication process that uses aesthetic appeal and on-skin technology to create temporary metallic smart tattoos of sorts. The skin wearable tattoos can store such features as NFC tags, circuitry, and also come with customary designs.

The collaboration with MIT Media Lab seems to be an extension of the Tattio concept. Cindy Hsin-Liu Kao, a PHD student and contributor to DuoSkin at MIT says DuoSkin is a blend of fashion and tech. She says there is a growing culture of metallic tattoos, which provides a perfect chance to include technology.

Kao adds that metallic tattoos are actually an affordable street culture, so DuoSkin is developed as an inexpensive connection method. Other than a gold leaf for connectivity, the tattoo is comprised of easily sourced items. For example, temp tattoo printing paper, a vinyl cutter, and any desktop graphics editing software can all be used.

The software is used to create the circuit, which is then passed through the vinyl cutter with the gold leaf on top.

While uses could potentially be limitless, Microsoft Research and MIT have some early ideas for the concept. Like Tattio, the tattoo could change color by reading body temperature. Other possible uses include a mobile trackpad on your skin, controls for a connected devices, or as a data store. NFC connectivity means devices can connect to the tattoo and see data.

When discussing Tattio earlier in the year, Microsoft envisioned the device as a connectivity tool. Some For example, it could connect to a smartphone app that lets users sync with each other through NFC. This would allow the swapping of image and text identity. Simply scanning a Tattio would reveal the identity of a person.