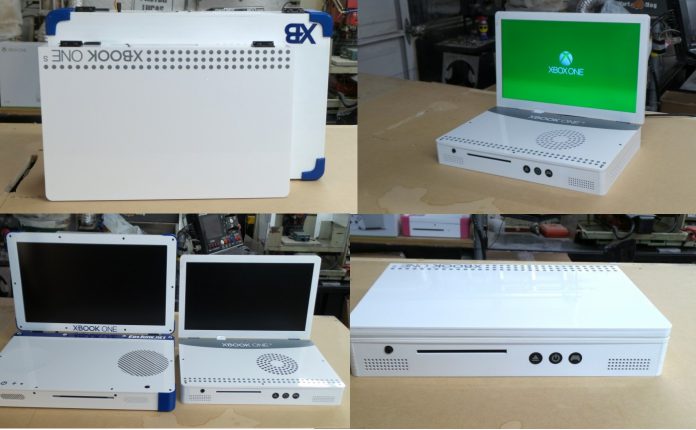 The recently launched Xbox One S is a svelte console that is 40% smaller than the original Xbox One. However, it is not truly a portable gaming solution, even if Microsoft did make the console more compact. Of course, the Xbox One is not meant to be portable, but if it was it would probably look something like the Xbook One S.

Created by Ed Zarick, the Xbook One S looks like the mutant offspring of an Xbox One and a laptop. You may remember Zarick as the same person who created the original XBOOK One in 2014. This time, he has added a 19-inch screen to the Xbox One S with 720p HD resolution. A Full HD panel would have been nice, but taking advantage of the Xbox One S 4K playback compatibility was always unlikely.

The reason for the toned down 720p panel is simple, to save on weight. If you want a portable Xbox One S, you want it to be light enough to carry around. The Xbook One S otherwise features all the same specs as the recently launched Microsoft hardware.

If you like the idea of 8th generation gaming on the move, you can buy the Xbook One S. More specifically, the 1TB version is available for $1545 and the 500GB costs $1495. Eye-watering prices we know.

If you do not need the portability then Microsoft has recently rolled out the console. The regular Xbox One S with 1TB of storage costs $349 and the 500GB costs $299. As well as being 40% smaller than the original device, the console gets other upgrades. For example, the power supply is now integrated, 4K is supported, and Bluetooth has been added.

We reported earlier in the week that the limited edition Xbox One S with 2TB storage has almost sold out. Microsoft confirmed that the variant was a limited edition run and that it will not be restocked in the future.