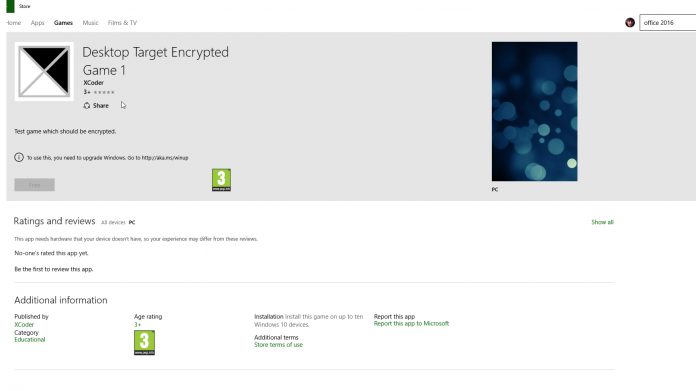 Likely as a protection from applications being decompiled for piracy and modification, Microsoft has been testing encrypted appx installs. The new filetype is named .eappx and is not accessible for modification even if the user takes ownership of them.

The files are encrypted on install using the Encrypting File System feature of Windows 10, and will be welcomed by developers. Previously, Microsoft offered obfuscation technology, but this solution should be more effective.

Encrypted AppX installs as EFS encrypted files in WindowsApps folder and user don't have access to them, oh dude

The online perosonality then provided a screenshot of the files for confirmation, noting that they are the app files themselves, not just the WinApps folder.

The bridge allows developers to convert their regular applications for install via the store, while also getting some of the UWP benefits.

Electron recently confirmed Centennial support for applications created using their platform. Applications suck as Slack, WordPress and Discord could soon be available on the store. The applications could make use of Live tiles, notifications, and automatic store updates.

The bridge means that developers don’t need to worry about creating different apps for each platform. Naturally, they will not have the aforementioned encryption, as it only applies to .appx files.

App encryption should make developing for the Windows Store far more attractive for developers. They will no longer have to worry about their games being modified or stolen and pirated.

Some have said they would not develop until the capabilities were released, and now official support appears to be just around the corner. It will be interesting to see if there is an influx in new apps once their requests are met.

You can take a look at the files for yourself by downloading the encrypted XCoder game from the Windows Store.