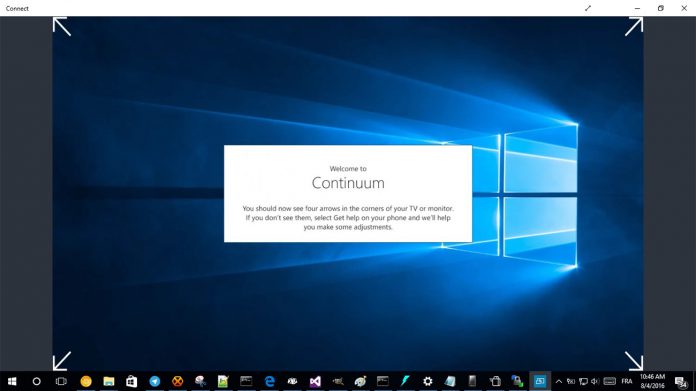 For those unfamiliar with Continuum, it allows users of Windows 10 Mobile devices to connect to a keyboard and monitor to use as a desktop PC. Except, thanks to developer Gustave M. it’s no longer limited to the Lumia 950 and 950 XL.

It’s a bit buggy, and has crashed twice, but other than that, it’s running flawlessly. In fact, he’s noticing that unlike the 950, his device isn’t running hot. He even claims that he’s able to use it on both displays at once.

Unfortunately, Gustave has not yet revealed how he managed to do it, but it’s likely quite difficult anyway. In response to questions on how, Gustave replied, “you need more than just registry editing so I can’t.”

The reveal could convince Microsoft to change their lock down of the service, however. Though he hasn’t tested it, the dev says that it should be possible on the Lumia 640 too.

Previously it was assumed that the phones processor would not be up to the task, but performance benchmarks show that the CPU and RAM are running at comfortable levels. It’s possible that the instability and crashing is behind Microsoft’s decision.

Microsoft has hinted that their Continuum service will be much expanded in the coming months. At the Build 2016 conference CEO Satya Nadella said:

“What is unique about our phones is this Continuum feature. If anything we will want to continue to build that capability out.”

According to WinBeta, one of these capabilities will be a “pick up where you left off” feature. It would widen the service out to desktops, and allow users to carry on working on files from where they left off.

This would further the company’s vision of a Universal Windows Platform. It would echo Nadella’s own words:

“We don’t have multiple Windows. They run across multiple form factors, but it’s one developer platform, one store, one toolchain for developers. And you adapt it for different screen sizes and different input and output.”

The further extension of Continuum to all Windows Phones, rather than just a select few, would give his words even more weight, but it’s probably just a pipe dream.