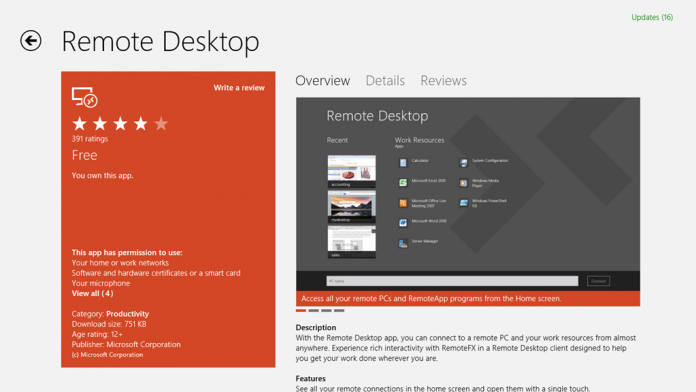 Microsoft has pushed out an update for the Universal Windows Platform (UWP) version of Remote Desktop. The chief change in this update is the addition of a desktop scaling option. The app now allows users to access this feature through the settings location in Remote Desktop (UWP).

Remote Desktop was rolled out by Microsoft at the beginning of June. The release followed months of preview build of the app. The service was among the first Universal Windows Platform apps from Microsoft.

UWP is Microsoft’s platform for allowing Windows applications cross devices and be available on all Windows devices. It helps developers to create apps for the platform where they may not have in the past because of the recoding needed.

Microsoft describes the app as:

“The Microsoft Remote Desktop app is designed to help you get your work done wherever you are. You can connect to remote Windows PCs or resources made available to you by your admin and be productive as if these resources were running locally.”

Remote Desktop is one of the Universal Windows Platform apps and allows users the same apps through many for factors. The service means users can pick up where they left off on tablets, desktops, smartphones, and Xbox One.

“The full version of the app will be automatically rolled out to Windows 10 and Windows 8.1 users who had the previous version. One of the standout features is support for Microsoft Continuum, allowing full PC functionality on a Windows 10 Mobile device that is compatible.”