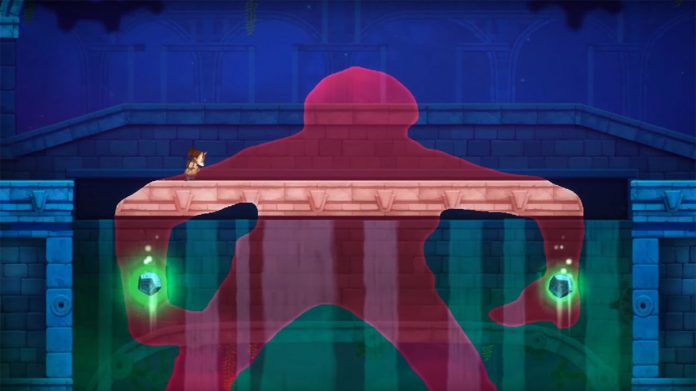 Quickly becoming a desk ornament for after its release, the Kinect hasn’t received much love from developers or gamers. After a long period of obscurity, the device has now made a comeback through FRU.

The game is a simple platformer, but has a unique twist: to get characters from one side of the screen to the other, you must use the shadow of your body as a bridge. The concept is fairly basic, but leaves the player contorting their body into all kinds of shapes.

As the game progresses more mechanics are unlocked, creating a bubble of water inside your body that the protagonist can swim in and lava that you have to avoid.

The Kinect has always been a device that is primarily party based, and to tap into this Through Games have included multiple ways of playing. One of the most intuitive ways is passing the controller over to a friend, who can then control the character as you move around the screen.

However, the other option can make for much more fun. Two people can have their silhouettes on the screen at once, combining their powers in an awkward, Twister-style standoff.

The game has a total of 110 stages and only takes an hour or two complete, but is great fun the whole time. It doesn’t have any story as such, instead relying on the unique mechanics to carry the player through to the end.

The Future of the Kinect

The sudden success of FRU shows that Kinect can be done well with the right ideas. With hope, it will encourage other developers to move to the platform in a way that Microsoft never could.

The growth of the device appears to be limited, however. With the Xbox One S requiring a separate, $40 adapter, it seems unlikely to gain the popularity it needs overnight. Though praised by almost everyone who has played it, FRU seems to have come too late to save a dying market.

FRU can be purchased for 33% off today on the Xbox Store.