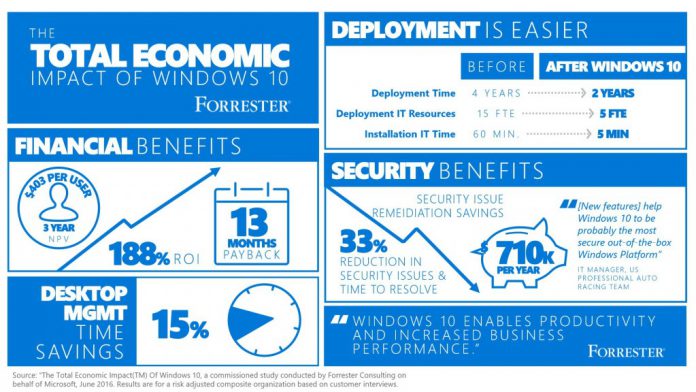 Microsoft has often said that Windows 10 is the most efficient IT, Security, and Productivity platform. Now the company is putting up some hard data to back up the claim. Forrester Consulting was commissioned by Microsoft to carry out a Total Economic Impact (TEI) study of Windows 10. The results show that the platform reduces costs for customers.

That’s according to Microsoft and this study, so is hardly definitive. However, on an official Windows blog post, Jason Leznek discusses the study and its conclusions. The study focused on four organizations from different enterprise fields. Included in the study was a health department, auto racing team, global IT service company, and a food and beverage conglomerate.

Each of these companies adopted the Windows 10 platform early. Through interviews with these Microsoft partners, the study found that the platform reduces costs in several areas. Windows 10 needs less time to install and manage, is more secure, and lets employees complete work faster.

“Windows 10 requires less IT administration time to install, manage, and support, with easy-to-use features and more self-service functions. One customer found that deploying Windows 10 was quicker and easier by as much as 50% from their last operating system upgrade, and overall IT administrators estimate a 15% improvement in IT management time with Windows 10 — valuable time back to help in other key IT areas.

Improvements, such as faster boot times, convenient access to corporate applications, increased security, and better mobility tools help IT and users increase productivity and complete work more quickly and effectively. Employees, especially mobile workers, estimate they have 25% more time to get work done than they did before.”

Microsoft confirmed at its Worldwide Partner Conference (WPC) that Windows 10 is now on more than 350 million devices globally.

While Microsoft commissioned the study, it was still carried out by an independent company. That means the results are largely accurate. Of course, they only paint a small picture of the Windows 10 user-base. Still, it seems major companies are happy that they adopted the platform.