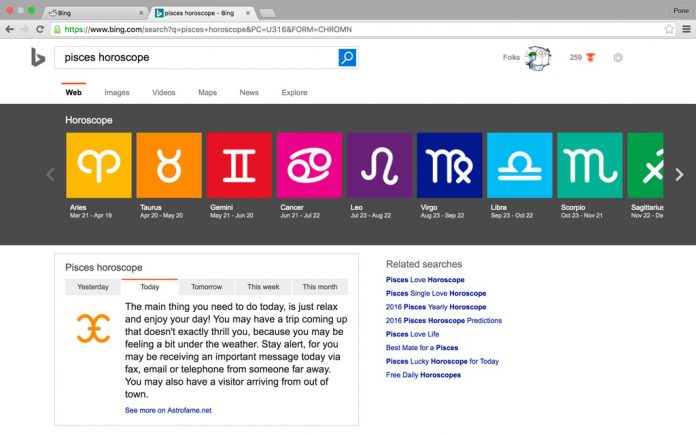 Nonsense or not (we’ll let you decide), horoscopes are big business. Millions of people around the world check their horoscopes every morning to see what fate has in store for them. Microsoft is tapping into that user-base with a new feature in the Bing search engine.

The company has debuted a new daily, weekly, and monthly horoscopes feature within the search engine. Redditor c0mpl3xy first spotted the new addition, which gives users their readings when they make a search for their zodiac sign. For example, if Gemini is entered, Bing will bring up readings for that corresponding sign.

I tried this feature out in Europe and it is not working, while contacts in other global regions are saying the same. However, horoscopes on Bing are definitely active in the United States, in an exclusive manner for the time being.

Of course, the US is often used as the first nation for roll outs by Microsoft. This is especially the case with Bing because the search engine enjoys a solid market share in the country. Microsoft will almost certainly roll out the horoscopes feature to other regions in due course.

Sure, this is a bit of a throwaway feature, but it shows Microsoft adding more power and capabilities to the search.

The company has been making more substantial changes to the platform over recent months. Image searching on mobile has been introduced, while a music shortcut and price comparisons were added to iOS last month.

A recent Microsoft Research project found that Bing could track search habits to successfully predict if users were suffering from pancreatic cancer.