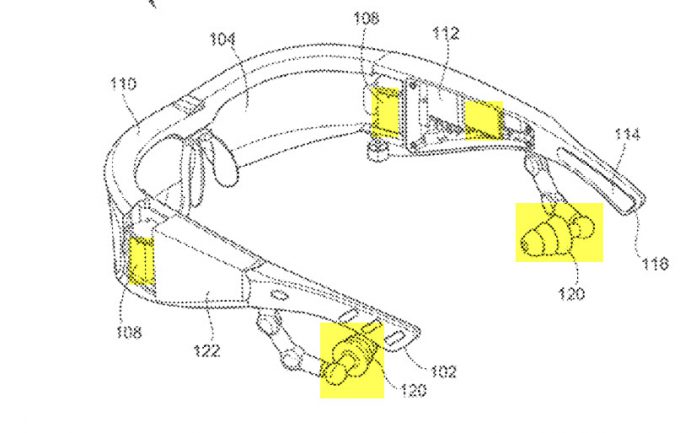 In the patent filing, the device is described as “An optical assembly, comprising: a wedge optic including an input wedge, an angled surface adjacent to the input edge…and an LED lighting system optically coupled to the input edge”

Early depictions of the HoloLens showed office workers using physical keyboards with it, but the patent suggests further options, including “a lock position of a virtual keyboard” as well as a virtual mouse. This could make the device more suitable for the working environment and as a standalone PC.

It also mentions some details about the methods used by the camera:

“The images are formed by a microprojector 2114 on each side of the glasses for conveyance to the waveguide 2108 on that side. In one embodiment, an additional optical element, a variable focus lens 2152 may also be furnished. The lens may be electrically adjustable by the user so that the image seen in the waveguides 2108 are focused for the user. In embodiments, the camera may be a multi-lens camera, such as an ‘array camera’ where the eyepiece processor may combine the data from the multiple lenses and multiple viewpoints of the lenses to build a single high-quality image…In embodiments, use of the array camera may provide the ability to alter the focus of an image after the image has been taken.”

The patent also illustrates well the various image stabilization techniques Microsoft has tested for the HoloLens: “Image stabilization is performed on digital images as they are formed. This technique may use pixels outside the border of the visible frame as a buffer for the undesired motion.

Alternatively, the technique may use another relatively steady area or basis in succeeding frames. This technique is applicable to video cameras, shifting the electronic image from frame to frame of the video in a manner sufficient to counteract the motion.”

Whether or not some of the many features mentioned in the patent filing will make it into later versions of HoloLens is difficult to say, but it’s clear that Microsoft has thought carefully about the scope of other uses, also talking about face and iris recognition, fingerprint scanning and helmet integration.