Backing up the initial claims on the Lumia support channel, a support worker for Microsoft says that the company is in talks with Snapchat regarding and official app. Ok, an unnamed support worker is hardly the high-up confirmation we may be wanting, and it is not really official either. But hey, it’s the best we’ve got.

Ok, putting out cynical hats on for a second. There is no information on whether the staff member in question has any authority on when apps would be released, or would even know if the company is working with the message service on a Windows 10 Mobile app. This could easily be a support worker towing a customer-friendly line and making Microsoft sound good with information that is not accurate. 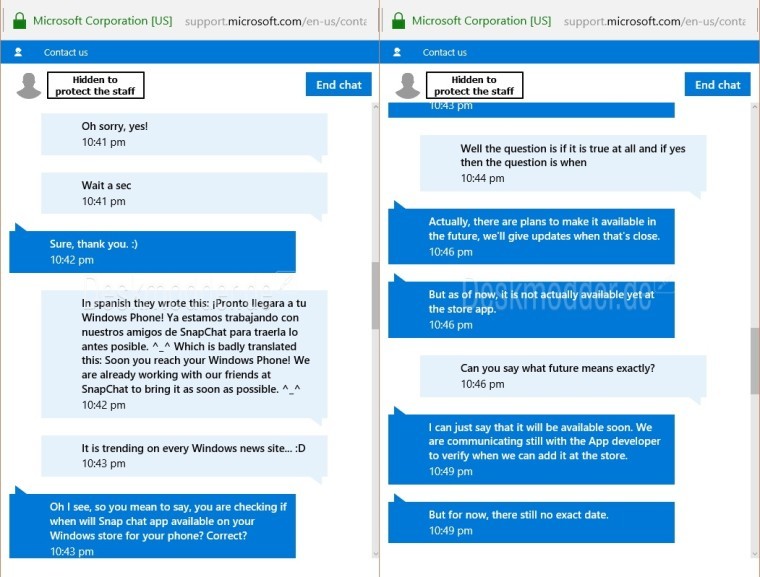 Considering the earlier reports of Snapchat coming to Windows 10 Mobile, there is certainly something interesting going on. Take it with a pinch of salt until something more official drops.

Snapchat has said many times that it would release an app on Windows 10 Mobile but said application has never arrived. Unlike other major names not on the Windows Store, Snapchat has also aggressively gone after third-party apps offering a back door into its service.

It is arguable that the company does not Windows, but it certainly would not hurt to be on Microsoft’s mobile platform. Earlier in the year, Snapchat said that it expects its revenue to be six times higher in 2016 than it was a year ago. Debuting on Windows 10 Mobile could help to push that revenue higher, but with a $16 billion valuation, the company is doing fine regardless.