If you look at the latest tablet sales figures from Strategy Analytics, you will notice that White Box is the most dominant company in the market. White Box is not a company at all though but is instead all of the generic no-brand slates you see on the market … they are now collectively outselling the giants of the market.

However, in terms of raking in money, Apple, Samsung, and Microsoft continue to be the profit makers, with Microsoft’s outlook possibly more encouraging than others. In a dying market (tablet sales were the worst in Q1 2016 since 2012), Microsoft is positioning itself to have long term potential.

Back to White Box tablets for a minute. The rise of these machines as a customer preference highlights a general disinterest in the tablet market over the last two years. Apart from some exceptions (we’ll get to Microsoft soon), companies are seeing declining sales and it seems if consumers want a slate, they do not particularly care if it is a cheap device. 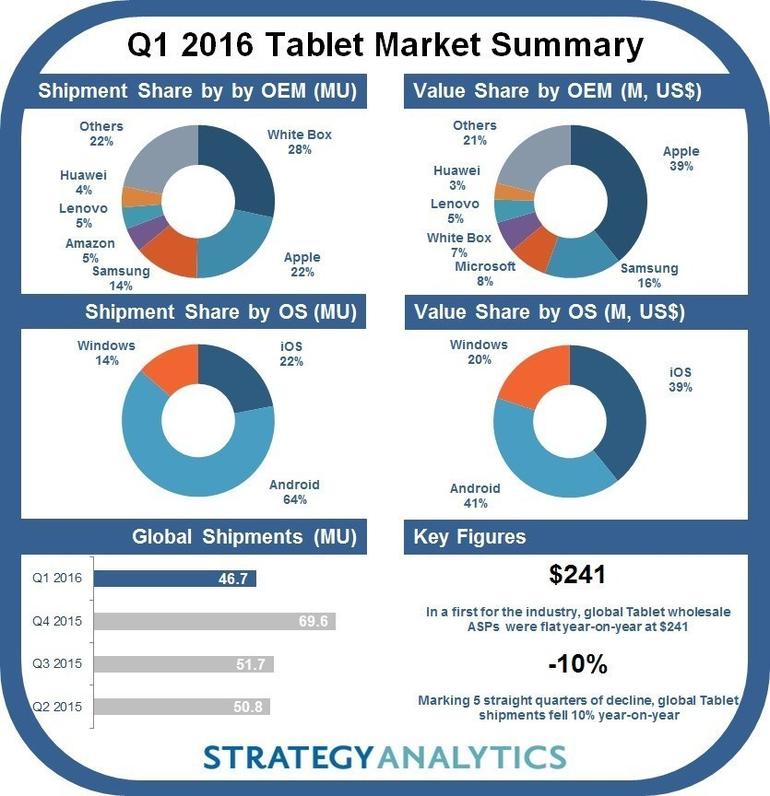 In terms of individual company sales, Apple remains the runaway market leader with its iPads continuing to dominate sales, despite drastic declines in sales. Cupertino’s 22% of the market is the field leader, with Samsung in second place with 14%. The Korean company suffering its own sales worries in recent times means it cannot make ground on Apple.

A quick look at the very interesting graphic from Strategy Analytics above will show that Apple and Samsung also make the most money in the tablet market. However, Microsoft presents the most interesting situation as the company is the third most profitable tablet company but is not in the top five best-selling slate companies.

Indeed, the company suffers the shame of being lumped into the “Other” category in terms of outright sales, but that clearly is not the whole story. Sure, the high margins of the Surface products mean that profits can be high from limited sales, but evidence shows that the hybrid tablet market is on the rise and Microsoft with Surface is at the forefront of that.

The company is in the interesting position of being among the few tablet makers who are seeing increased sales and profits. Does that mean there is a market shift away from consumer tablets and more to productivity-minded hybrids? Maybe, but what is certain is that Microsoft is finally starting to click with consumers in the tablet market, despite sales remaining relatively low.

TSMC Plant in the US Will Supply Apple with Chips