Callout Extensions and Review Extensions APIs have been added to the Bing Ads network, allowing users to engage further with potential customers.

Microsoft has revealed two new APIs that will make it easier for users to have their adverts stand out on the Bing platform. The application program interfaces in question are Review Extensions and Callout, both of them designed to enhance text ads on the Bing Network. 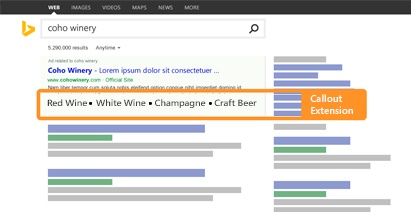 Callout Extensions (above) allow business to put customizable bullet points beneath their ads, allowing them to draw special attention to any specific products or services. It is possible to place four to six bullet points under each impression, and users can also choose to have the callouts placed on advertisement, or across a whole group.

In its official announcement, the Bing team said a group can have up to 20 callout extensions: 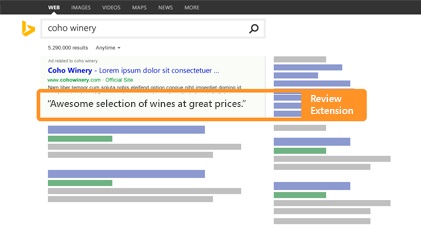 Review Extensions (above) are interesting because they let businesses and individuals to place a review under an ad impression, while allow it to be seen in the search results. Microsoft says this is an ideal way to build up trust with potential customers, with third party reviews.

Like Callout Extensions, Reviews can be associated with one ad or a campaign group, with between one and 20 review ad extensions possible across a group.