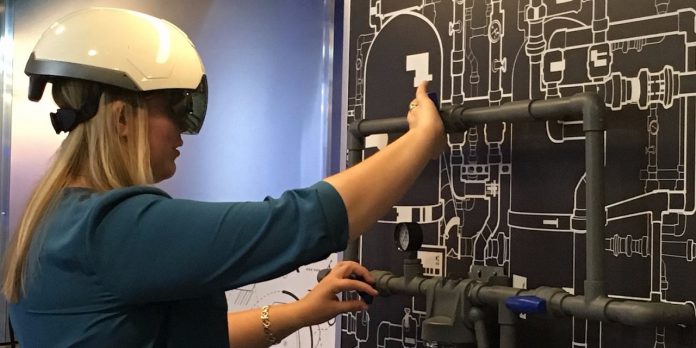 Microsoft has the augmented reality market sewn up at the moment, but slowly rivals devices to HoloLens are starting to be announced.

The fact Microsoft is leading the way in augmented reality is hardly a surprise considering HoloLens is just about the only consumer ready augmented device.

On the other side the virtual reality market it teeming with devices, pointing to the easier way to implement VR compared to the more challenging augmented reality tech, which requires placing computer imagery over real-world objects.

Joining Microsoft and a select few others (Magic Leap for example) in the augmented reality space is the Daqri smart helmet.

Not quite as slick as HoloLens, Daqri is much more focused on industrial use and comes with a hardhat like design that features a photonic display. In terms of specifications, the headset sports an Intel CoreM processor, thermal camera, two USB ports, and Intel Realsense depth sensor.

The hardhat design means the Daqri is ideal for industrial settings such as construction or factories, with the device boasting an enviable battery life to ensure it can be used for prolonged periods. The USB ports allow users to connect peripherals to the headset, which can also be attached to the headset to free up workers hands.

“Users are provided with unprecedented levels of information about the world around them for the most precise display and tracking possible,” Daqri says on its website.

Aside from its specs, the true orientation of the headset is its augmented reality technology, which can detect an environment and map the space for a 3D reconstructions.

“When you have multiple people wearing the smart helmets, they share that information and you build an entire model of that facility with that combined data.”

Tis mapping tool could offer a live schematic of a facility over the actual environment, showing electrical and piping installations.