The latest data from market researcher ComScore shows that Windows saw a market decline in the US through the first three months of the year.

ComScore has released its smartphone usage figures for the United States and again the numbers are not looking good for the Windows mobile platform.

Of course, this is Microsoft’s home market, but usage for devices running the company’s mobile ecosystem are dwindling says the market researcher ComScore.

There are two ways of looking at the slip. Of course, any decline is worrying, but Windows as a mobile platform is definitely going through a transition period and the fall in usage may not be that bad.

Glossing over the situation maybe, but the fact remains that Microsoft has hardly focused on its mobile strategy so far this year. There is a serious lack of flagship devices, and in a market like the US that is an important sales area at the high end. 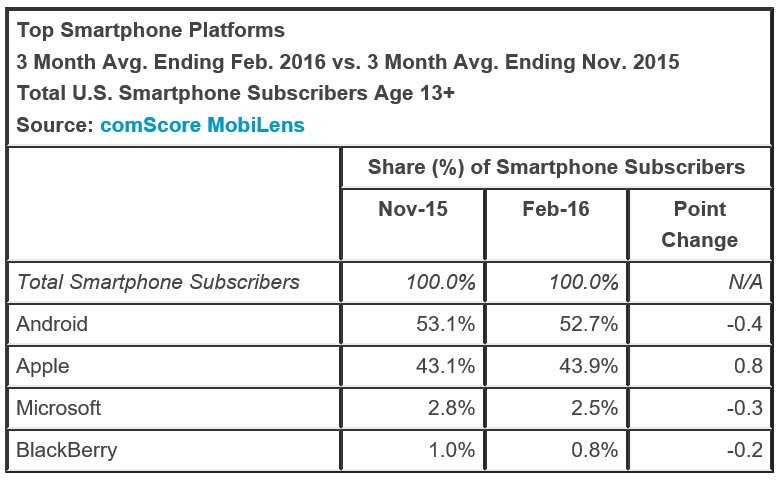 It is also worth mentioning that ComScore is not discussing sales, so Microsoft may have sold the same numbers but saw market share decline thanks to the popularity of iOS and Android over those months.

So, not all that bad at all then? Not quite, because while it is easy to make some excuses for Windows’ continued poor performance, there is no getting away from the fact that there is not really a light at the end of the tunnel. No major smartphones are coming to the platform in the coming months, and at Build 2016 last week Microsoft made little mention of Windows 10 Mobile.

The company has made it pretty clear that is refocusing its mobile strategy towards software and cloud computing, so on the hardware front sales may decline. There are still around 5 million Windows handsets in operation in the United States, but the number is likely to decrease unless Microsoft pulls something exceptional from its sleeve.