The latest preview release for the Word, Excel, and PowerPoint apps on Google’s mobile OS are available to download for insiders.

With over 70 listed apps on the Google Play Store, Microsoft has gone above and beyond in making their apps and services available on Android platform.

The list includes popular productivity apps like Word, Excel, and PowerPoint — initially packaged into one Office Mobile app, but newer versions of the apps have been released individually, together with their own Office Insider for Android program.

This brings us to the latest pre-release builds of those three apps, which have just been announced on their Office Insider community page. The beta (16.0.6729.1006) comes with the following new features:

– Send any Word, Excel or PowerPoint document as PDF
– Open a RTF document in the Word app
– Insert a picture from camera on the Word and Excel App
– Convert a table to a range on Excel app
– You can apply Morph transitions to your slides to move several objects at once 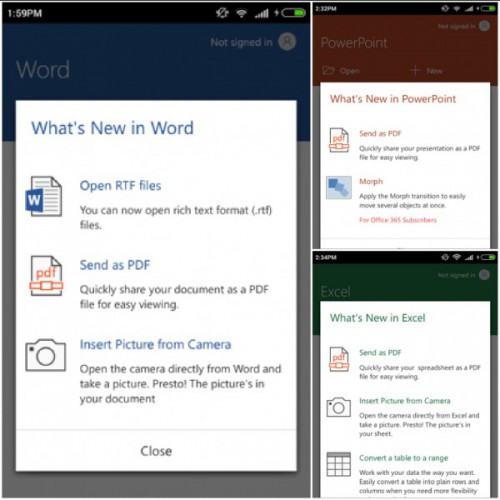 Do note that the trio of Office apps are only recommended for phones and tablets running Android OS 4.4 KitKat and above.

If you’re not an insider yet, you can head to the program’s Google+ page and join the community to gain access to pre-release version of the apps, as well as to interact with the product team members.