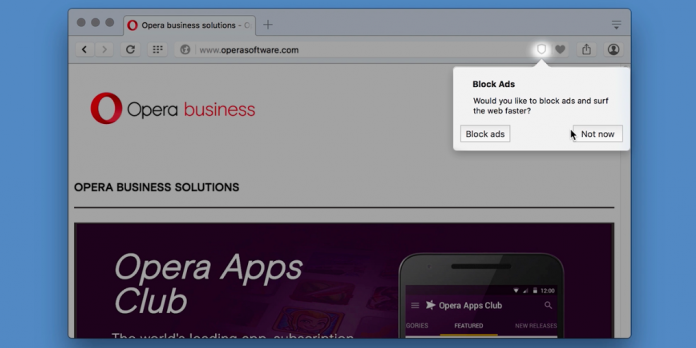 As explained on the company’s blog post, users can also expect to get up to 90% faster loading time on select websites because “the blocking happens at the web engine level”.

Do note that that level of performance boost is only possible if the websites are not loaded with an ungodly amount of ads in the first place.

Nevertheless, the browser is a fine and simple solution for folks who want to stop seeing unwanted and often intrusive ads while surfing the web, but don’t necessarily want to be bothered with the extra steps of downloading and installing extensions.

The default is set to off by design, but turning the feature on is as easy as a click of a button on the top toolbar. The browser will also suggest enabling the ad-zapping on if it detects that there are ads that can be blocked.

Other related features include detailed stats of ads on websites you’ve blocked and a built-in benchmarking tool to compare the browser performance with and without the ad-blocking feature.

A recent study by PageFair/Adobe reveals that the use of ad-blocking software worldwide has nearly doubled between 2014 and 2015.

Internet users are turning to ad-blocker software in droves for several reasons. Some of those ads, like videos that play automatically in the background, can suck up precious bandwidth and are just plain annoying. Then there’s also the security aspect of it, as some webpages are filled with malware masquerading as ads.

If you haven’t given it a go and don’t mind getting an alternative to the Edge, Opera Browser 37 with built-in ads blocking is available as a free download from the developer channel. Keep in mind, however, that this isn’t a final release.