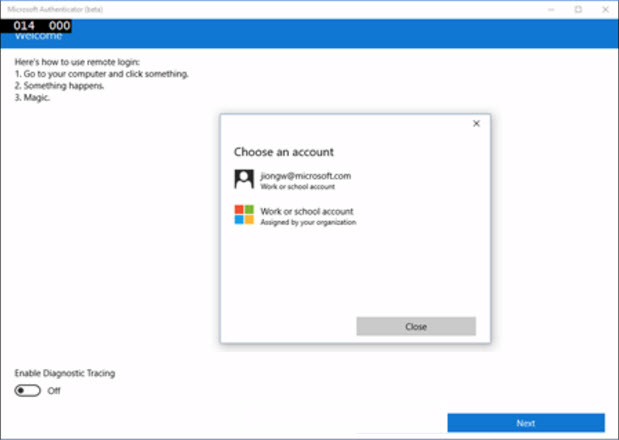 The Authenticator app is undergoing an update that will let users unlock their PCs from anywhere by using Bluetooth authentication on Microsoft’s Windows 10 platform.

According to a report from a reputed Microsoft tipster, the company is working on a new application that will add an extra dynamic in unlocking Windows 10 devices.

Microsoft is currently testing a version of the Authenticator app for Windows 10, which would give the user the ability to unlock their Windows 10 machine through Bluetooth.

The discovery was made by WalkingCat and is called “phone sign-in beta”. It will arrive as an update of Authenticator, allowing a user to simply tap the machine name from the Bluetooth list to unlock it.

Redmond launched Windows Hello, which is a non-password authentication that allows users to unlock their machines through fingerprint scanning and cameras. At the moment, Authenticator is in internal beta testing and is only running on the Windows 10 Mobile platform. It is all but guaranteed to come to Windows 10 PCs, allowing the mobile devices to unlock the machine through Bluetooth.

Considering the Authenticator is not available on Android and iOS, we doubt Microsoft will be introducing this Bluetooth unlock feature for those rival platform.

WinBuzzer first got a sniff of this application back in January, reporting that the app will have connection to Wi-Fi and Bluetooth, while also tapping into the camera. The app will also allow the addition of an AAD (Azure Active Directory) Account.