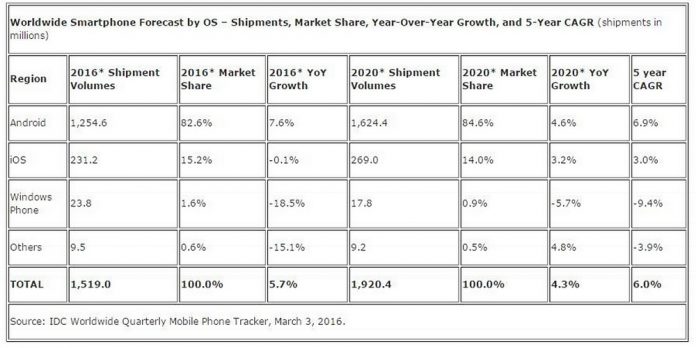 Market researcher, IDC, predicts that Microsoft will see a significant decline in Windows sales in the mobile market, changing its long time stance of being optimistic about Windows market growth.

Even that modest figure was overcooked as Microsoft shipped just 27.3 million units, and it seems the IDC has now given up on being optimistic about Redmond’s struggling mobile platform.

In a revision of its predictions for 2016 and the coming years, the IDC has said Microsoft will move just 23.8 million devices during 2016, a small number, but still nearly 6 million per quarter, a figure Microsoft failed to achieve even through the 2015 Holiday Season.

The researcher has often pegged Windows on an upward trajectory and once predicted the platform would see sales of 43.6 million by 2019. 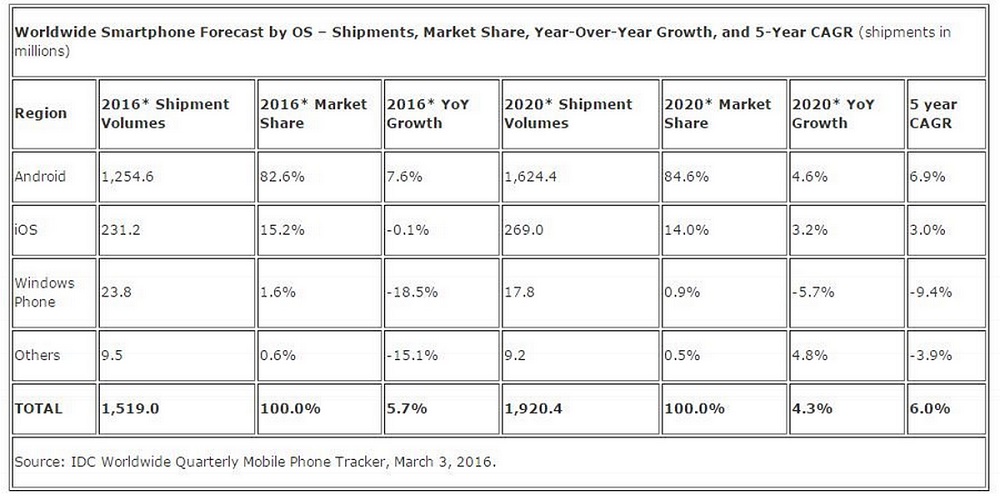 Because of stagnant sales, the IDC is now being far more modest and actually predicts Windows phone sales to drop significantly year-on-year until they reach 17.8 million in 2019. That figure would represent a -9.4% decline for the platform over 5 years and it is hard to see how Microsoft could salvage its mobile plans from there.

Indeed, with Windows showing little signs of taking off as a mobile platform, it is becoming increasingly hard to see how long Microsoft can stay in this market. The company does not say how much money it makes from the Windows platform on mobile, but the only reason for Redmond to maintain the OS is if it turns profit.

At the moment Windows 10 Mobile is actually underperforming compared to previous builds, which was not how the story was meant to go at all. This was the build that was meant to compete with Android and iOS, but while Windows 10 Mobile can match most the technical feats of its rivals, Apple and Google are still way out in front.

Those rivals are uncatchable it would seem, and even the IDC (a long term Windows optimist don’t forget) is saying as much:

This past year was another challenging year for Windows Phone as shipments were down 18% in 2015 to 11.1 million units with roughly 95% of that volume coming from Microsoft (or Nokia) branded devices. The recent MWC conference in Barcelona showed a few new products from partner OEMs although it remains unclear how serious the Windows Phone offerings will be from OEMs.

Microsoft needs to secure more third party OEM support for the platform if it is to see any growth, and equally the company must try to get major smartphone brands to build for Windows. Xiaomi made its new Mi 5 Android flagship portable to Windows 10, which is a start, giving Microsoft a potential boost in the important Chinese market.

A start it may be, but Windows needs dedicated devices from the likes of Samsung, LG, Sony, HTC, Huawei and so on. It is perhaps a sign of how lowly Windows is viewed that HTC, a company struggling wholesale in the Android market, is not making a more aggressive push in the Windows space.

In other words, even companies on the brink and selling no devices running Android, view Windows as too much of a risk and a platform that will unlikely change their fortunes. It is a bleak picture for sure, and IDC tends to agree.