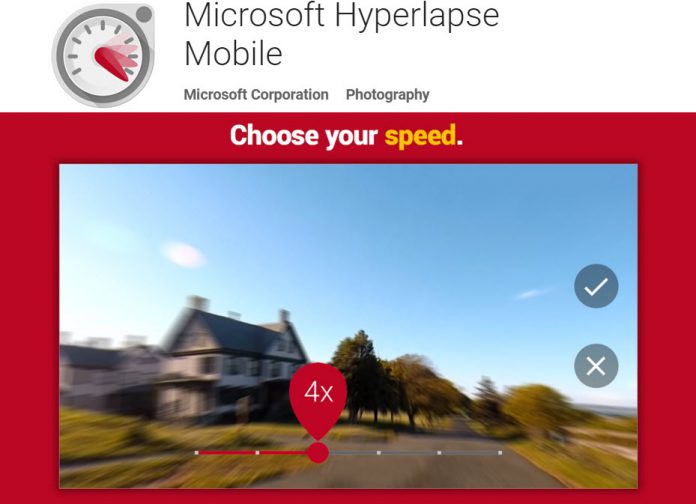 The feature upgrade enables Android users to create even more stunning time-laps videos with their smartphone or tablet.

In addition, an annoying orientation bug with Nexus 5x devices has been fixed.

The Hyperlapse Android app has received a great reception so far, counting more than half a million installs.

A Hyperlapse apps are also available for Windows Phone / Windows 10 Mobile and other platforms.

With Hyperlapse Pro for Windows Desktop and Hyperlapse Pro for Mac OS X users can processes videos taken on phones, GoPro cameras and other devices, save as many speeds as they want, from 1-25 times, and  produce hyperlapses that can be released at different resolutions and frame rates.

Microsoft even offers Hyperlapse for Azure Media Services as a product for companies who want to integrate Hyperlapse with their web and app offerings.

According to Microsoft, Hyperlapse is a result of over 20 years of computer vision research at the Microsoft Research group.

Johannes Kopf, who is one of the key researchers last year received the 2015 ACM SIGGRAPH Significant New Researcher Award for his contributions to Hyperlapse. A 2014 scientific paper on hyperlapse technology became the basis for all the Microsoft Hyperlapse products.

In this video uploaded by Kopf, you can learn more about how Hyperlapse works in detail and the difference between Hyperlaps videos and simple time-laps videos.