Microsoft has released Windows 10 Build 14271 for Insiders, and along with it is a “Redstone” preview that begins the company’s promised move away from the traditional Control Panel.

As well as the Windows 10 update, Redmond is also rolling out the same upgrade (Build 14276.1004) for Windows 10 Mobile devices that ship with the software.

There are multiple fixes made to the PC build, but in terms of adding new features and functionality, this is a pretty thin update.

The one key change is the addition of a Redstone preview that moves more settings away from the Control Panel and to “Settings”.

Microsoft has previously confirmed that it plans to remove the Control Panel in favor of placing all PC tasks in the universal Settings location. Redstone will usher in that change, and this preview of things to come moves taskbar configurations away from Control Panel and to Settings.

It is unclear whether Redstone, the next major Windows 10 update expected in mid-2016, will ditch the Control Panel entirely. It seems likely at this point though, but Microsoft could issue some more minor updates to migrate Control Panel features to Settings, or alternatively Redstone could just do it all at once.

Aside from introducing the first hints of the removal of the Control Panel, Microsoft turned its bug fixing hands to Windows 10 Build 14271, and here’s what’s been done:

– We fixed an issue where the window borders on apps would change from accent color to black after every upgrade to a new build.

– We have updated the music control icons that are shown in taskbar previews in music apps like Groove to look more crisp and clean at higher resolutions.

– We fixed an issue where the taskbar would sometimes not auto-hide and show unexpectedly on top of full screen windows such as showing above a PowerPoint presentation when in slideshow mode.

– We fixed an issue where the “Hide notifications while presenting” setting preference is lost after upgrading to a new build.

– The entire app header in Action Center is now right-clickable instead of just the app name or “x”.

– We made it easier to dismiss all officiations from a specific app in Action Center by increasing the target area to encompass the entire app header.

– We fixed an issue where interaction notifications would not show a button to input text in some cases.
– Fast user switching should work now with Picture Password.

– We fixed an issue where some desktop (Win32) apps look missing from Start.

– We fixed an issue where the accent color does not automatically change when the slideshow option is chosen for your desktop background. 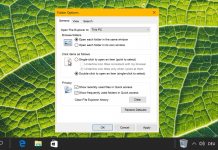 How to Open File Explorer Folder Options in Windows 10 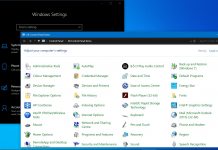