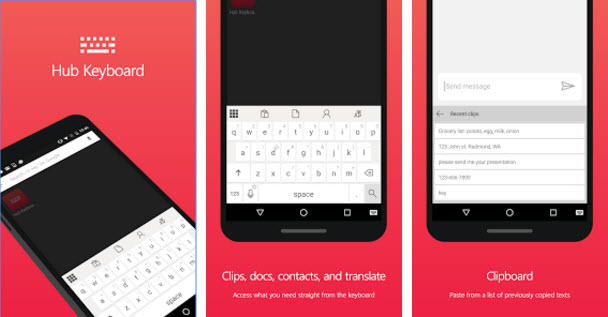 Hub Keyboard, a new app from the employee-powered Microsoft Garage offers multitasking features like translation and document- or contact search right from the keyboard.

Instead of the typical juggling between several apps and Android to find files or bits of information that are usually copied and pasted, users can use Hub Keyboard for quick access.

The idea for Hub Keyboard came from Steve Won who is a senior designer on the Office team. Won started developing Hub Keyboard as a personal project, but was able to get more support after showing it off at an internal science fair.

“Personally I don’t like switching between apps to do different things on my smartphone,” “But all these different apps on a smartphone, they have to conform to rules of a keyboard and that got me thinking about the project as an interesting idea I wanted to explore more. We’re giving users a wider gamut of tools.”

“I was thinking about how we can help users be more productive in the mobile space,” Won says. “After a couple of months hacking at it, there was an internal science fair, a showcase of independent projects, and that’s where I was able to receive a lot more feedback and attention. Things started picking up.”

After the internal science fair, the project participated during Microsoft’s internal //oneweek Hackathon in 2015 where, a team of seven collaborators joined in.

According to Won, he would have been unable to bring it to a stable level, but as a team of several colleagues under the Microsoft Garage umbrella they were able to create a final product.

“I’m a designer and I knew just enough coding to put together a prototype to convey my vision, but to make it more stable and solid, I needed more help on the engineering side. I never imagined shipping code as a designer, but being able to do that throughout the course of this project has been pretty cool.”