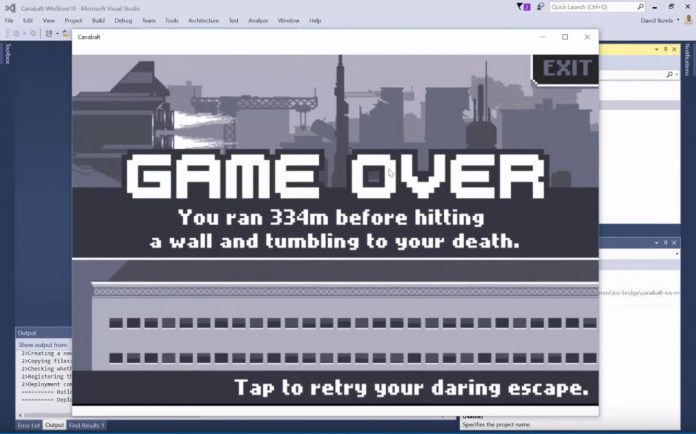 Just weeks after Microsoft has released its new Windows Bridge for iOS it already brings the first results. Developer David Burela has published a video showing off how he ports an iOS game into a Universal Windows App in just five minutes.

For the quick demonstration Burela used the open-source iOS game Canabalt, one of those many games that previously existed as an online flash game before finding their way to iOS.

The source-code of Canabalt for iOS is freely available on GitHub, so Burela could just download it and create a whole new Windows app in just five minutes.

During the process Burela imports the Canabalt source-code into Visual Studio, makes some minor adjustments and then publishes it as a Universal Windows App, which as you can see in the video seems to run without any issues.

While not every iOS app will be as easy to port as Canabalt, this demo illustrates quite well how easy it has become. With Windows Phone market share going down this strategy might pay off, bringing thousands of existing apps also to the Windows ecosystem.

Windows Bridge for iOS tools have been available as an open-source project on GitHub for months under the code name Project Islandwood. In addition, Microsoft is also working on other bridges like a Web bridge for Windows 10 called Westminster and project Centennial, which aims to help developers package and publish existing .NET and Win32 apps to the Windows Store.

In contrast, Project Astoria, which was supposed to become Microsoft´s Android to Windows 10 bridge, has been put on hold for the moment. It seems the company gives priority to iOS for the moment when it comes to attract porting of existing apps to the Windows ecosystem.