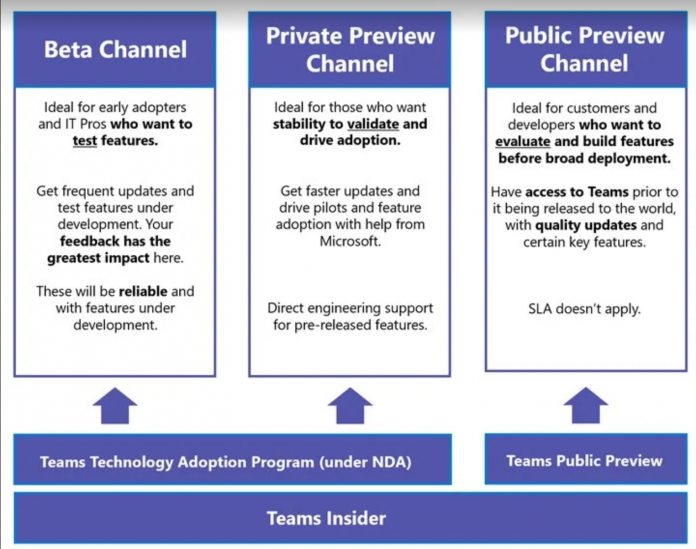 Specifically, Redmond is changing the names of the testing channels and creating a new one called the Public Preview channel.

There are now three test channels for Teams “Insiders” to choose from: Beta, Private Preview, and Public Preview. Yes, Microsoft is obviously taking inspiration from its Windows and Office Insider Programs, as well as Microsoft Edge testing channels.

Beta is for the earliest adopters, IT pros and admins who want to test bleeding edge features. Like all first release preview channels, these new features can be unstable and not fully formed. Next is Private Preview, which allow validating features through a more stable release.

Finally, Public Preview is a new channel for users who are ready for deployment but want to test features first.

Microsoft points out, “One key difference between Teams and rest of Microsoft 365 is that Teams delivers feature rollout against build rollouts. This means (1) a feature can be enabled without a new build update, and (2) different channels may have the same build version at any point in time.”

One of the more interesting things about Microsoft Teams is the frequency it is getting new features. Microsoft has rolled out scores of new tools this year and usually double figures each month. How testers can keep up and have time to properly test new features before they go public remains to be seen.

Certainly, Microsoft has not addressed these concerns with the new channel.