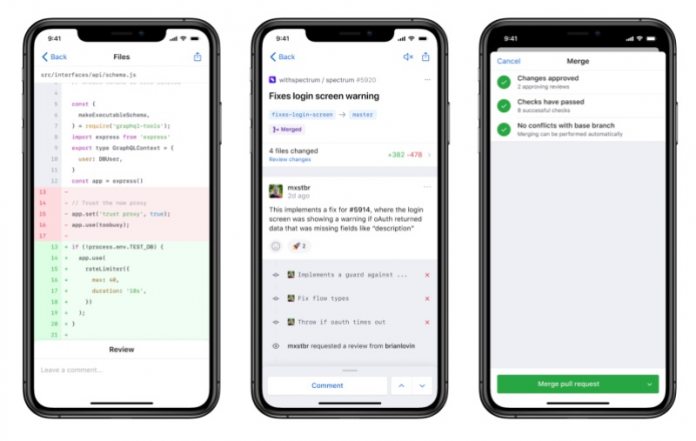 Microsoft’s GitHub code repository has received an important set of tools for developers focused on collaboration. Perhaps most important of the new reveals is the launch of the service on mobile. GitHub is now available in app form on iOS (for iPhone and iPad).

The company says an Android version will be rolling out in early 2020. According to the leader of the platform, mobile will drive a substantial amount of traffic in the coming years:

“My bet is that more that half of interactions that take place on GitHub in 5 years will take place on mobile,” GitHub CEO Nat Friedman said in a press conference.

On the mobile experience, users will be able to receive notifications from both private and projects. Further features will include the ability to add code, create a new issue, and merge requests.

“This is kind of like the missing link to the GitHub experience,” GitHub VP of engineering Dana Lawson told VentureBeat. “With mobile you can manage, triage, and clear notifications, collaborate on pull requests, and then also you can receive push notifications when directly mentioned.”

At GitHub Universe this week, the company used the conference to also discuss some other new features that have arrived recently. Among them was Sponsors, a service that was launched back in May. It is a new program that allows users to provide financial backing to open-source developers.

Under the program, users will not be paying for services, but rather backing the projects and developers they want to support. It is a similar idea to Patreon, which allows people to back content creators.

“With GitHub Sponsors, developers can sponsor each other directly from their everyday workflows,” GitHub senior product manager Devon Zuegel said.