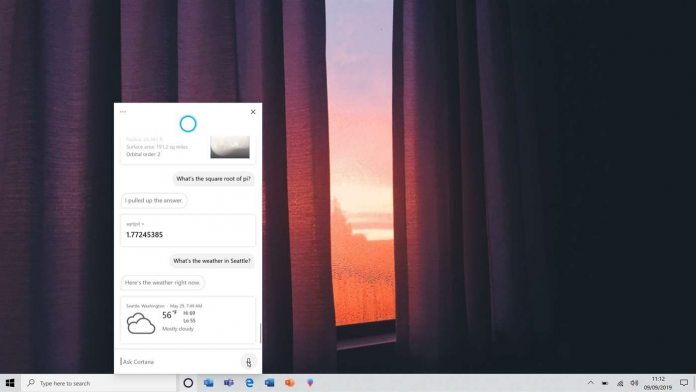 Microsoft’s Cortana virtual assistant has gone through some major changes over the last two years. Microsoft is continuing to ring the changes. As we reported last week, a preview of a UWP Cortana app for the Microsoft Store shipped a Windows 10 Insider Preview. Microsoft has now placed the app in the Windows Store.

It was first presumed the application would not be fully available until Windows 10 20H1 next year. However, it now seems Microsoft is preparing the Cortana Beta app for Windows 10 19H2. It is worth noting the app requirements state it can only be downloaded by Windows Insiders running preview build 18362 or higher.

As for Windows 10 19H2, Microsoft has still not started flighting full previews for this release. That’s odd considering the Windows 10 20H1 branch has been in preview since March. It would seem this year’s second Windows 10 update will be incremental, although the full release of the Cortana Beta app now seems likely.

“As an intelligent assistant, Cortana will find all kinds of info, give you weather and traffic updates, and help you search the web. But Cortana will also get to know you better all the time. Cortana will help track and find the things you’re passionate about, like your favorite artists or sports teams, to give you better recommendations and updates.”

Microsoft has now fully separated Cortana from Windows. In other words, there’s no technical reason why the assistant should come embedded in Windows 10. We expect Cortana will still come with Windows 10, but it is now also available as a separate app.

By being in the Store, Microsoft can now deliver Cortana updates outside of general Windows 10 releases. As the company has not offered any official reason for the change, we will have to wait to see what Microsoft has planned.