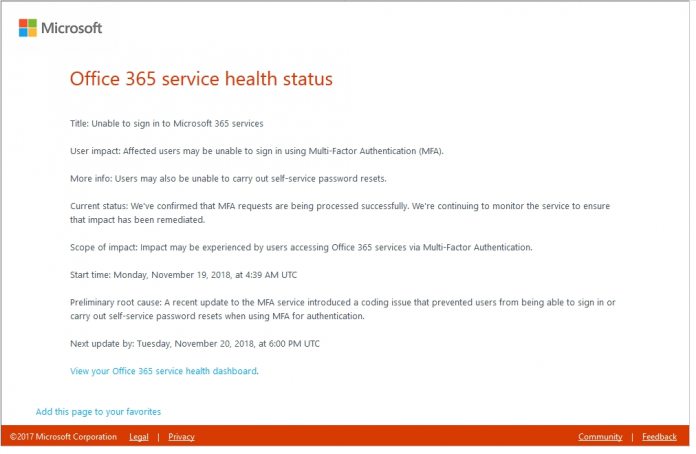 Users of Microsoft cloud solutions were left frustrated yesterday as they were denied access. Organizations have been shut out of Azure and Office 365. Microsoft has confirmed the issue was caused by multi-factor authentication, while password resets were also affected.

On its Office 365 status page, Microsoft confirmed the problem and explained its origin:

“A recent update to the MFA service introduced a coding issue that prevented users from being able to sign in or carry out self-service password resets when using MFA for authentication.”

“Starting at 04:39 UTC on 19 Nov 2018 customers in Europe, Asia-Pacific and the Americas regions may experience difficulties signing into Azure resources, such as Azure Active Directory, when Multi-Factor Authentication is required by policy,” Microsoft said.

The company says engineers have created a hot fix that should prevent most authentication errors. However, some users are reporting the fix caused problems of its own, such as not prompting them to login.

It is worth noting, Microsoft says the problem has been solved at time of writing:

“We’ve confirmed that MFA requests are being processed successfully. We’re continuing to monitor the service to ensure that impact has been remediated.”

This is the second time users have been shut out of Microsoft’s Azure services recently. Although, in September an outage to the service occurred and not a login issue.

A problem in the company’s South-Central US center caused Visual Studio Team Services, Azure Active Directory, and Azure Bot Service to be down.