Microsoft last week rolled out Windows 10 Preview build 17746 to Windows Insiders on the Fast Ring. Today, that build has moved up to the release preview branch. Some reports suggest this is the release to manufacturing (RTM) build of what will be the October 2018 Update.

We already know the final release of what is Redstone 5 will be Windows 10 build 1809 and will be finalized in September. That build will be known as the October 2018 Update when it reaches end users in October.

Could it be that true that the current Build 17746 on the Inside is the RTM release? I am currently sceptical about this, but some reports suggest that this is the RTM. Microsoft has a whole month and some days before the final wide launch of Windows 10 October 2018 Update. It feels slightly early for the RTM to be moving through the Insider.

As we have seen with preview builds over the last month, Microsoft has slowed down on adding new features. The company is now stabilizing Redstone 5 and making sure the platform is ready for release.

One probable reason for an early RTM is because Microsoft wants to avoid the issues it faced with the April 2018 Update. Back then, Windows 10 build 1803 was finalized in late March and due for an early-April launch. However, issues with the build delayed the launch and Microsoft only just squeezed the update in before the end of April.

Thanks for everyone that’s shared feedback about naming the tabs you’ve set aside in Microsoft Edge. We’re evaluating the right approach for this feature and in the meantime, it has been removed from RS5 builds. 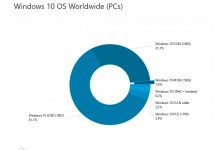