Over the course of this year, we have reported on Qualcomm developing a new Snapdragon processor to work more potently in laptops. The silicon will be the company’s update for Always Connected PC and by extension Windows 10 for ARM.

Now it seems that the so-called Snapdragon 1000 will not be a jacked up mobile processor. Instead it could be a fully independent CPU for laptops. This would be an interesting development because it would mark Qualcomm’s first entry into the dedicated laptop market.

The company has enjoyed enormous success in mobile. Indeed, Qualcomm is the name most think of when considering mobile processing. That’s because its Snapdragon chips power the majority of smartphones, from budget to flagship.

Qualcomm is now starting to finalize development of the Snapdragon 1000 and has benched it on Geekbench. The processor will help realize the full potential of Always Connected PC and Windows 10 for ARM. Benchmark results show the chip comes with eight CPU cores and is clocked at 1.96 GHz. 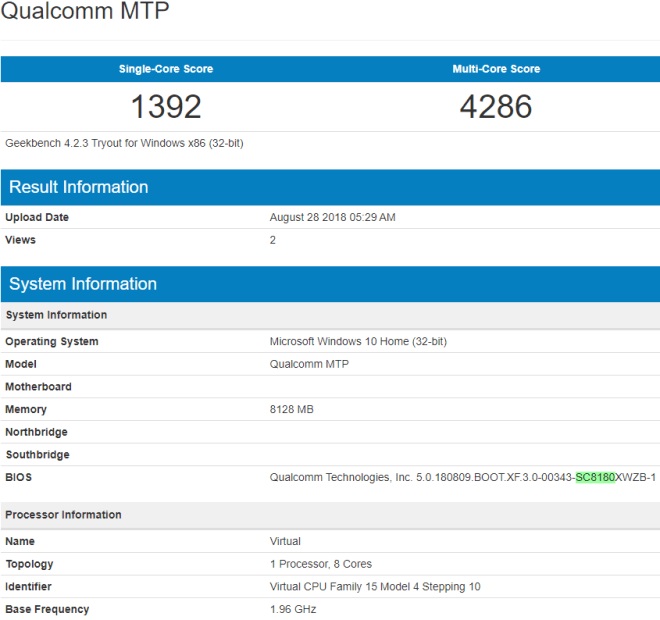 Qualcomm is expected to reveal the chipset at CES 2019 and laptops with the CPU will likely be announced at the same events.

As mentioned, the core goal of the Snapdragon 1000 is to improve performance on Qualcomm powered laptops. Microsoft’s Always Connected PC and Windows 10 for ARM is an interesting concept. It is supposed to bring the best of laptops (performance, apps, storage) with the battery life and mobility of mobile.

However, the first generation of devices disappointed in terms of performance. These are powered by the Snapdragon 835, a smartphone flagship CPU. The processor is simply not optimized to power laptops and reviews for Always Connected PCs have been poor.

The Snapdragon 1000, with its dedicated laptop capabilities, should address the balance.