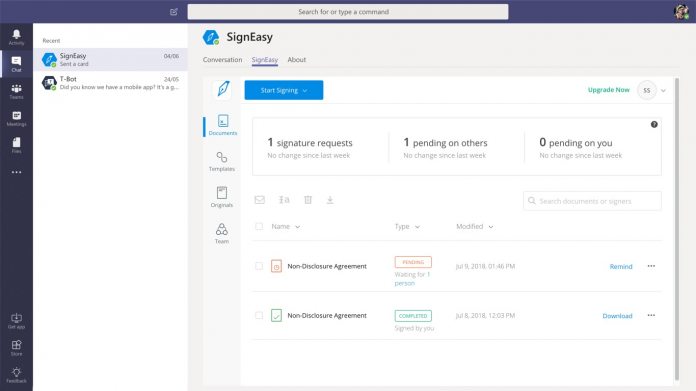 Microsoft Teams is locked in a battle for the workplace with Slack, as admitted by Redmond and evidenced by Slack’s recent successful funding round. To ensure Teams stays ahead, Microsoft will need the backing of developers with new apps. With that in mind, SignEasy has made its debut on Microsoft Teams this week.

Essentially, SignEasy brings a, easy, way for users on Teams to sign documents and request signatures. It is a popular service with over 5 million users. Through the app, Microsoft Teams users can sign service agreements, legal documents, invoices, purchase orders, and just about anything else.

Documents that need signing are received with a “sign-and-send” command. Alternatively, users can send this command for documents they want signed by someone else.

SignEasy integrates with Teams through a bot. This bot works within a chat list and allows users to easily interact with the app.

The app arrives on Teams with the following features:

There’s no doubt that the race for the workplace chat market is heating up. While I argue that both Slack and Microsoft and co-exist and thrive, the two are pitting themselves as rivals.

While Microsoft Teams has the whole Office 365 subscriber base to tap into, Slack has remained in close competition. Earlier this week, the start-up announced another successful funding round. The company drew a massive $427 million.

Slack has now surpassed a market value of $7 billion ($7.1 billion) and is now better placed to compete with Microsoft.