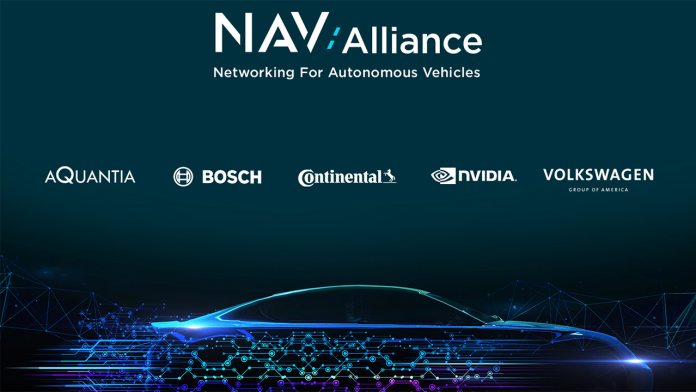 Tech and car companies are joining forces to work on the difficult problem of autonomous cars. Known as the Networking for Autonomous Vehicles (NAV) Alliance, the collaboration plans to bring fast transfer speeds to vehicles.

With the huge amount of data, autonomous cars have to process, such solutions will be essential. At the core of the alliance sits Aquantia’s chips with up to 10 gigabits per second ethernet transfer rates.

“Redundant and diverse AI algorithms are the key to level 5 automation. However, the volume of data generated by multiple types of sensors (camera, radar, lidar, ultrasound) can reach 32TB every 8 hours – that level of data transfer calls for a new breed of ultra-high-speed networks, including Multi-gig Ethernet,” explained James Hodgson, senior analyst for Autonomous driving, ABI research in a press release. “The NAV alliance will catalyze the development of a reliable next generation of networking platform for self-driving cars,” said James Hodgson, Senior Analyst Autonomous Driving, ABI Research.

The firm is allied with Bosch, Continental, Nvidia, and Volkswagen to form an architecture with CPUs, GPUs, engine control units, cameras, sensors, storage, and more. The car itself will essentially be a powerful computer with the ability to analyze swathes of data quickly enough to make informed decisions.

They’re also working on the development of specifications for reliability, cross-compatibility, and security for the industry, ensuring vehicles will be standardized. Of course, part of the effort will go towards marketing and education, likely about the risks of self-driving cars versus human pilots.

With its collaboration, the NAV alliance hopes to enable that, as well as draw in more partners as the technology grows.