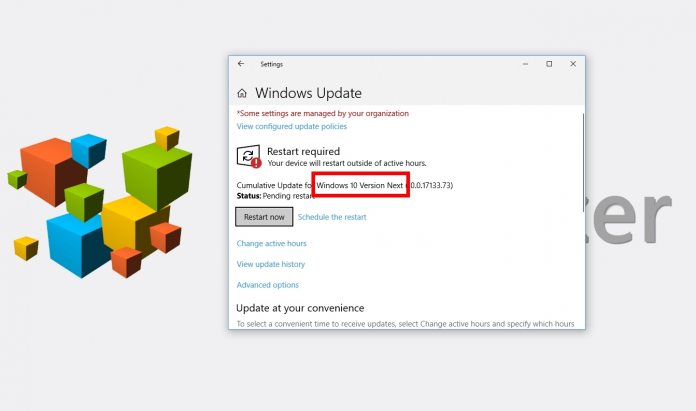 Microsoft was certainly ready to pull the trigger on the Spring Update. The company released the RTM (release to manufacturing) build on the Insider Program release preview branch last week. In other words, it was all good to go and would be rolled out on Patch Tuesday.

By the way, I am still running with the Spring Creators Update or Spring Update names for Version 1803. Microsoft has not officially announced the official name, so I stand to be corrected on this matter. If you check the image above, there is still no name for the release.

However, over the weekend, the company discovered a blocking bug that meant the Spring Update needed to be back on ice. The company says the flaw is rare enough that Windows 10 Version 1803 needs to be delayed.

Microsoft is now working on a fix and we are probably looking at a timeframe of a few weeks. That’s because the company would have to build the fix and test it before rolling it to production.

While a major Windows 10 upgrade has now been postponed, this could be twisted as something of a win for Microsoft. Certainly it highlights the importance of the Windows Insider Program. We often view the Insider Program as a playground to test out new features on Windows before their official launch.

The service is more than that, and is like a give and take relationship between Microsoft and users. In return for early access to new builds, Microsoft gets feedback from users on flaws and issues in test builds. This time, it seems feedback for the RTM build of Version 1803 (build 17133 on the Inside) has been valuable.

It allowed Microsoft to pick up on a problem before Windows 10 Version 1803 reached the wider user-base. Sure, not many users would have had issues as Microsoft rolls out Windows 10 updates in stages. In other words, Version 1803 will come to a small subset of users when it first launches. In the proceeding weeks and months it will spread to all the market.

While it’s good that Microsoft caught this bug and delayed the release, it highlights the fact major upgrades like the Spring Update are never entirely stable out of the gates. That’s why Microsoft allows businesses to delay updating to new Windows 10 versions. On that subject, the company will be changing its deferral options through Version 1803.