Microsoft has announced the general release of PowerShell Core 6.0, bringing a ton of new features to its users.

The biggest of those is easily cross-platform availability, with an open-source release for Windows, macOS, and Linux, as well as the hybrid cloud. By utilizing .NET Core 2.0, PowerShell Core can work on all three platforms and is built for heterogeneous environments.

On the Windows side of things, there’s support for 7, 8.1, and 10, as well as Server 2008 R2, 2012 R2, and 2016. Linux has official support for Ubuntu, Debian, CentOS, Red Hat, OpenSUSE, and Fedora. Support for Kali and ArchLinux is also available unofficially via community packages. macOS supports PowerShell Core 6.0 on 10.12+.

It’s the beginning of PowerShell’s future, with PowerShell remaining as a stable alternative, but Core receiving all the new features going forward.

In this build, that includes support for side-by-side installations, docker support, SSH-based remoting, and updates to language, engine, and cmdlets. You can also do tab completion based on runtime variables, as well as arguments.

Unfortunately, there are other features that were planned but didn’t make it into the final build. They include PowerShell Workflows, Snap-ins, WMv1 cmdlets, and support for DSC execution.

However, Microsoft is working with on more features for the next build, with help from the community via GitHub. 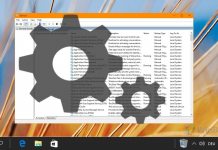 Windows 10: How to Stop, Start, Enable, Disable, and Restart a Service

How to Delete a User Account in Windows 10 (6 Methods)