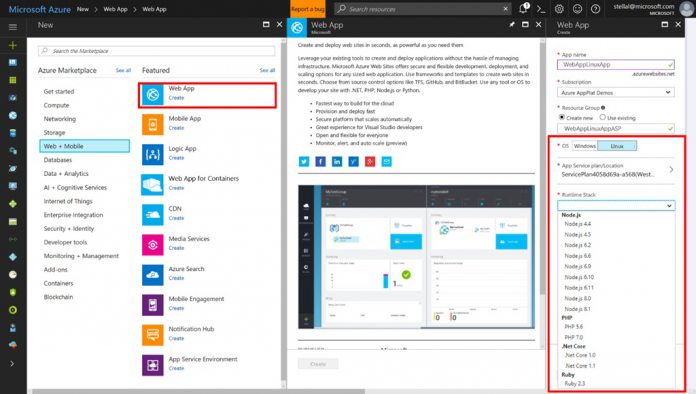 Microsoft yesterday announced the Azure App Service on Linux is shifting to general availability. It will now be available to all Azure cloud customers on the open-source platform. Included in the release is the Web App for Containers feature that delivers expanded image support on Linux.

In its announcement blog, Microsoft discusses the benefits of the Azure App Service on Linux. For example, the company points to its ability to offer high productivity development.

With the built-in images, users can create cloud applications using ASP.NET Core, Node.js PHP, and Ruby. There all run on Linux and allow customers to manage applications without needing to worry about infrastructure.

Users can just select the stack a web app needs and let Azure set up the environment and maintain the app.

Azure App Service on Linux also streamlines deployment. Web App for Containers allows customers to containerize their apps in seconds. This is achieved by pushing the image to a registry such as Docker Hub or Azure Container Registry.

Web App for Containers handles the deployment of the application and provisions the necessary infrastructure. The service will also automatically patch the Linux OS when needed.

To help developers get started with App Service, Microsoft has published the use cases. It is also possible to try App Service for free. Additionally, the company is urging customers to Sign up for our upcoming webinar focused on containerized applications.